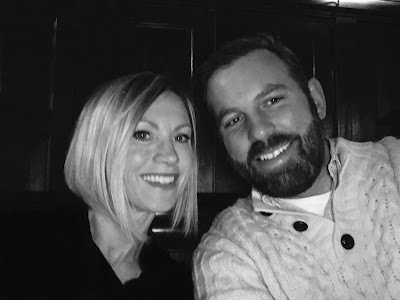 Last night I went out with my friend Victoria to see Elephant Revival (who opened for Josh Ritter). They were spectacular. Really talented musicians, all of them, and Bonnie Paine has kind of an otherworldly voice.

I have some unabashedly poor taste in music but I also have some excellent taste, and they are far and away on the good taste end of the spectrum. Go listen to them!

Victoria is friends with the band members, and as such, she introduced me and we talked after they played. (We went backstage, like, no big deal. Me, I've never hung out with a band in my life. Yeah, so we were hanging out with the band...)

Anyway. They are lovely, intelligent, normal people, who don't just stand around being attractive and band-like, whatever that might mean. They chat with you and even ask you questions about yourself.

One of them asked me what it's like being married.

I don't think I'd ever been asked that. It took me briefly aback. What's being married like?

So I said I find it very stable and comfortable and solid, and because of that, sometimes tedious and dull. I said that the best and the hardest parts of being married, for me, are having children. Because you don't have enough time to enjoy the person you decided to marry.

What I didn't say was that I used to be a huge grass-is-greener person. Always sure I'd be so much happier over there. Or with that person. Or...or...or. It took me a long time to understand that I was just terribly unhappy with myself. Because you can move cities and even countries, and you can change boyfriends and jobs. You can keep yourself busy, frantic, off-kilter, moving to the next thing, and then getting there and being unhappy. You can break the hearts of others. You can break your own heart multiple times.

You can do this over and over. I did this for a very long time. And then, at some point, you stop and realize that you are your own problem. Or anyway, I did. With help.

Fortunately, by the time I met Nick, I had stopped being so much of my own problem.

Which is not to say that sometimes, which Nick and I are not getting along, I don't think I'd have a more fabulous existence somewhere else, or with an old boyfriend. I have fleeting moments where I think about how much more X and I would probably travel, or how much more Y and I might laugh.

But I cannot actually imagine how the film reel of not being married to Nick and being with someone else would play out. I'm not even trying to create that movie.

It's really just when I'm mad, frustrated, sad, I sometimes see quick snapshots of my alternate life, in which I'm having more fun.

Now I know how these thoughts work, however. I don't know if you ever read that book The Bridges of Madison County? It made me cry and cry (admittedly, I was in a bad place when I read it), and then really made me mad.

Because anyone can be The One if you only spend three days with them while your husband is at the county fair or wherever it is he went. It's life and living and dealing with the prosaic details and growing together that's the hard part. And also, in the end, the good, glue-you-together part.

When I conjure up my past, we're always smiling, traveling, doing something fabulous, having a great time. It's never raining. Or annoying. Or boring.

Which, I mean, come on. And really, who knows?

The other night I told Nick that none of my old boyfriends had ear hair and he said, "They do now."

I learned a number of years ago that your reality is your reality and it doesn't necessarily occur to you while you're growing up that there's anything really special or different about it.

But it's a lesson I forget.

I mean, you know I've been saying for ages and ages that I'm writing a book. And I have been, sort of, this whole time. I mean, on and off. But I get so bogged down. First, I was bogged down with emotion and exhaustion. I needed to write about suicide to help get it out.

But I was also so mired in grief that I would write in circles and not get much of anywhere, much like a dog trying to find that best spot on the pillow and you're watching like, seriously? You're going to turn around again? And again? Even though you're in the exact same place? Just lie down, for god's sake.

Also, I was stuck on my dad's story. And I couldn't figure out how to make it mine. Even though it was mine all along. I just didn't understand how.

And now I do. It is fully mine.

But then I have so much insecurity. Oh my god insecurity. Who cares what I think? What do I really have to say? Who do I think I am?

I've asked myself these things even though last year Leigh sat me down and made me watch this fabulous Brené Brown TED talk on vulnerability and shame. (And if you haven't seen it, it is one of the best ways you can spend 20 minutes. I promise.)

Also, I have two kids and I'm tired.

Oh, and I am a kick-ass procrastinator. I bet I could totally win a procrastination contest.

Recently my dear friend Diana, who has for years been one of my most encouraging friends, sent me Big Magic. I haven't gotten very far, but the message is such a good, positive one. (Years ago I quit Eat, Pray, Love somewhere in Pray, because I just got tired of Elizabeth Gilbert. Not her writing--her. But this book is really resonating with me.)

And recently something happened that really drove the positive messages, the ones that say that you can do it, that you have something to say, and that at some point, you really will get it together, home.

It was this: I am taking a memoir writing workshop at Politics & Prose bookstore. In the second class, we were partnered to talk about our projects. My partner grew up in a cult. That's what she's writing about.

She's is worrying about how to write it, making it interesting enough, and giving it a good enough title that people will want to read it.

And I was all, "People will want to read it. I'm dying for you to write it so I can read it. You can title it just about anything and people will be interested."

And I said, "CULT! You grew up in a cult! You had crazy, terrible experiences. This doesn't happen to everyone!"

Right?!? Wouldn't you want to read it?

But her reality is her reality, and she's worried about being good enough. About having an interesting enough message. About other people caring about what she has to say.

And I think, my goodness, if I'd grown up in a cult and managed to escape, I'd be all, hey! Listen! I have all these interesting stories that you need to hear!

Because insecurity is a mean little bitch, and fear and shame work hard to keep us small and quiet.

But I think finally, finally I may be done with small and quiet. I might be able to shove fear and shame to the side, at least most of the time. And so I'm going to commit.

This is really and truly the year I'm going to get it done.

So there.
Posted by Lemon Gloria on Thursday, February 18, 2016 7 comments

Can I talk about guns?

We had a robbery before Christmas, and afterwards a couple friends asked me if it changed how I thought about guns. I gave it some sincere thought and said no, that I still would not be willing to have a loaded gun in the house. And I wouldn't shoot someone over property.

I'd like to say that I can't imagine shooting anyone, ever, under any circumstance, but if someone were hurting my kid, I believe I could do just about anything.

I'm not actually completely anti-gun, in that I think people who hunt have the right to own hunting guns. I have, it turns out, a number of friends with guns, who, as I understand it, keep them locked in a steel case, and keep the ammunition separate. They don't have a loaded gun sitting around the house or in their purse when they go to Walmart.

I'm not trying to take their guns away. But I don't think anyone has the right to own machine guns or assault weapons. And I believe the NRA is an evil organization.

Recently we discovered that a skylight had been opened. Like, unscrewed and taken off and then put back on, but not completely. As it turns out, our skylight was never properly installed. So it had been take-offable for years. It just hadn't happened before.

Was this connected with the robbery? Had someone come through, coincidentally on the day we had contractors here? Or had someone opened it and decided that the drop to the floor would just be too far and too dangerous?

I was freaking out. What if we went to bed one night and someone came in? What if they encountered my mom or one of the kids and hurt them?

We got alarms put on, and then had steel bars installed.

But prior to that, I felt so vulnerable. How would I protect my mom and my kids if someone did come in? I could see the lure of owning a gun.

I still do not want one, and would not be OK with having one. But I do understand the appeal of knowing you had a loaded gun and wouldn't hesitate to shoot. Someone enters your home and threatens your family? You have a trigger to pull.

I see how this idea would promote a sense of safety.

And that's where I am, which is a place I never was before. I will never have a gun in our house, but I think I understand it.
Posted by Lemon Gloria on Thursday, February 11, 2016 7 comments