I mean, it's only hair but each follicle represents some large percentage of my self esteem 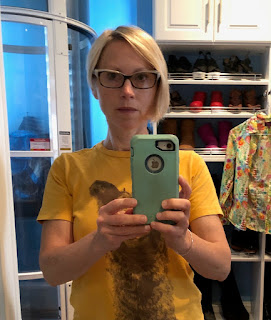 I think I'm going to cut all my hair off today. But I'm a littel terrified.

Today is a better hair day than many. It looks shiny and is staying flat. I've had a lot of weird poof curl hair days with this cut and the humidity.

So now that it's a good day I'm having second thoughts. But then tomorrow I could hate it all over again.

I used to chop my hair relentlessly when I was in a bad place. It got shorter and shorter as my mental state deteriorated.

I don't think this is what's happening.

Although I did mention the hair cutting to my friend Tosha last week, and how I feel like it might just feel so good to get rid of all of it, and she said, "Do it!" And then she leaned close and said, "You're going through something, huh?"

I guess? Maybe? I didn't think so?

Because I have to talk about all of these things endlessly with everyone, I mentioned it to Kris and Wendy. I also mentioned how my self-esteem is so wrapped up in my hair, and it's easier to have more hair than less.

Kris totally sympathized. Oh my god yes with the self-esteem. For Wendy, her hair is just her hair.

I should point out that she is always willing to listen endlessly about hair trials and tribulations. Hair just isn't one of her triggers.

So I got this asymmetrical haircut a couple months ago, but it's not doing the trick. I thought I could maybe have half short but still have the long side to tuck behind my ear.

I could have my cake and eat it too.

No. And as I said, the weird and random poofs that I can't seem to manage really get my goat.

But also, apparently, I might be going through something.

Plus, it could be super easy to travel with shortyshort hair. In fact, I'm considering using shampoo bars like Dr. Bronners, in my small attempt to reduce plastic.

How easy would it be to just travel with a bar? And not have to hair dryer dry your hair?

Or I might hate how I look and be very self conscious in a whole lot of unfamiliar situations.

I think I'm going through something.

Which is fraught for some of us.

And at this point in my life, I have a lot of friends who are dads—incredible fathers—who are simultaneously being feted and missing their dads today. I want to hug all of them. I’m thinking of Matt, of Chris (and Laura—not a dad, but missing one nonetheless), with new loss.

Fresh loss hurts the most.

Older loss still hurts, and sometimes just as much in random moments, but for me it’s more like a scratchy sweater that a loved one knitted. It’s maybe never been soft and cozy but you loved the giver and at some point you’re used to and even sometimes comfortable wearing it, even though that sounds unlikely. It’s familiar, and you know a lot about it, and you’re almost even old friends. Sometimes. I can’t lie: I miss my dad extra today.

Holidays like this, where the focus of your loss is mentioned everywhere, are extra hard.

So to this I say, I want to celebrate Nick for being the great dad that he is.

He’s loving and kind and demonstrative. He tells our kids he loves them and hugs them a lot, which is not his family’s culture. He revels in their triumphs. He tells them he’s proud of them. He works to be a partner to me in parenting. It’s not equal, but it’s closer to equal than what either of us grew up with.

And on the same day, I miss my own dad, who’d be a terrific, loving, fun grandpa to my kids.

I’ve recently gotten my children involved in my preparations for my Our of the Darkness Overnight walk.

India refers to suicide as “sumocide”—thus giving me the imagine of large Japanese men in loincloths hurling themselves at each other with intent to crush to death. Which is not great but that’s the truth.

In any case, the other night she got weepy and said she wished she’d gotten to meet him and asked if Jordan had. And then I had to fight tears and say no, he hadn’t either.

And days like today are harder because they underline who you don’t have. But it’s also true that we celebrate who we do have, and my kids are lucky to have Nick as a dad. And today we celebrate his Uncle Peter’s 80th birthday, which is a milestone to celebrate.

To all the dads, I celebrate you. To all those missing dads, I see you and I feel you.

I wanna glide down over Mulholland

Now that last week is over, I'm going to tell you it was one of those weeks where I felt less attached to life than I otherwise might.

I was not in crisis.

I understand very well the repercussions of exiting life the way my dad did. I know, I really do know how much it would devastate my family, and screw up my children forever.

Though my dad attempted suicide the first time when I was 11, I didn't really understand that it was an option until I myself hit a low, low point in my 30s. My entire world felt pointless. Both pointless and devastating.

I was alone, and would be alone forever.

I didn't make a plan, but I had an idea. If, in fact, everyone on the planet except me coupled up, and I was the only one still single, then, when my parents died, I could opt for suicide.

I couldn't do it before that, because it would be too cruel. But at that point, it was an option.

This thought soothed me. I had a solution. An out.

Now I don't have those thoughts in that way, because, god willing, my kids will outlive me, and I would never do to them what my dad did to us.

That's the rational part of me.

The irrational part of me sometimes crooks a finger and whispers that it would be so easy. The line between here and not here is a fine one, and sliding over it would be so quick, so painless.

Like I said, I'm not in crisis, and I wasn't last week, even though I was at a pretty low point for a sustained amount of time.

What I'm saying, I guess, is that I'm here, and I'm glad I'm here, but sometimes it's very hard. And I appreciate knowing I have a community that will support me if I reach out and ask.

Sometimes I ask. Sometimes I free fall. I am just lucky, so lucky there are people to catch me.

Butterscotch clouds, a tangerine and a side order of ham

I used to think I was a morning person.

Have I told you this before? I also to also have a great memory.

In any case, I told Nick the other night that I used to be a morning person and he laughed so hard I thought he was going to hurt himself.

To support my assertion, I said that in Peace Corps, I voluntarily got up at 5:45 am to go running every morning. The fact is, I went to sleep at 9:00 every night, because there were no streetlights, and once it was dark, it was dark.

It could, however, also be by contrast, because neither of them prefer to speak at all in the morning.

At any rate, at some point I became a not-morning person. And there have been years where I could barely struggle out of bed at all.

There were years that I blamed my children, because they were, in fact, to blame for waking me at regular intervals throughout the night.

But now they are solid little sleepers.

And lately my sleep is worse than ever.

So now I'm wondering if maybe I should cut out coffee entirely. Or have, like, one cup in the morning and then be done for the day.

This is very much not my M.O. I like many cups of coffee. Although I do stop with the caffeine by noon. Ish. But maybe, maybe at this juncture, that's not good enough.

I have a friend who quit coffee entirely because she found it made her anxious. Does it make me anxious? I don't know. Not sleeping definitely makes me anxious.

Nick has, upon threats of clockily harm, muffled the Heirloom of My Discontent. So now when I'm up at 3:00 am reviewing every single misstep I've ever taken in my entire life, at least I'm not also counting the hour and the half hour with DING DING fucking DING.

That's better. And yet, still I struggle.

Maybe I go to one cup. Or maybe switch to decaf. Maybe I give up coffee entirely. I do enjoy coffee. And caffeine.

But there have been a variety of things I've enjoyed over the years that have not been my friends.

Have any of you quit drinking coffee and felt like it improved your life?
Posted by Lemon Gloria on Thursday, June 06, 2019 14 comments