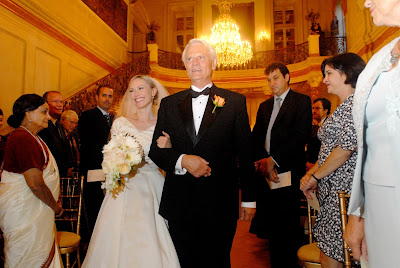 My dad was struggling at my wedding. He was proud, and he was happy. But I could see it in his eyes and his smile.

You know I use the same photos over and over. Some of them just resonate.

Sometimes I obsess about the fact that I don't have a nice photo of my dad and me dancing at my wedding.

Prior to my physical last week, I had to answer a couple questions about mood. One of them asked about hopelessness. I chose the yes I feel hopeless every single day answer.

I knew this was a depression screening. I figured it would raise a flag. But it was accurate.

So when I saw the doctor I felt the need to explain my hopelessness. I told her that I chose ever day because currently, with Covid and our political situation, as far as I can tell, there is literally zero hope on the horizon.

I don't think it's my chemical state; I think I'm appropriately medicated. I'm not in a personal pit of despair. I just think we're in a hopeless situation. The world right now is a hellscape.

Uh. Sorry if this is making you depressed.

Boy howdy am I fun at a cocktail party.

Anyway, it was our first meeting, I don't know that she was convinced. This was OK. I don't mind if in my file it says keep an eye on this one.

I wasn't trying to convince her. I was just, I don't know, feeling like I was OK. Mentally. Not physically.

Because physically my elbows hurt all the time even though I have taken a break from yoga and try not to lift anything heavy and also I have nose rot AKA rosacea, on which I am currently putting private parts cream which is holding it at bay until I can see the dermatologist.

Jeez, this really isn't the post I thought I would write.

The doctor asked about my support system. Who I have to talk to and to check in on me.

I have people. I reach out. I have a psychiatrist.

But I told her I was glad they ask those questions, and I know what they're trying to get at.

I want everyone to be asked these questions. I want doctors on the lookout. When there's an opportunity for a health professional to help someone who may need it, I am so glad.

We--those people--we are everywhere. And a lot of us are all sparkly on the outside, so you wouldn't actually know it unless you knew what to look for, or asked the right questions.

Sometimes even then you wouldn't know.

I don't know what one does about those situations.

So far, this year has been more about self-preservation than activism.

I remind myself that this is OK.

I'm actually one of the vulnerable people I worry about. Even though I think of myself as really, really strong. I mean, I am. Just not always.

We have to nurture or at least preserve ourselves so we have something to give to others. And also so we don't just walk around all batshit crazy.

I probably should've written a poignant post. The truth is, I think about my dad every day. I no longer carry the weight of the should-haves or the what-ifs, at least, not most of the time. I slide into them every once in a while, but it's become rare.

What I think about more is if he'd had the vocabulary to talk about his feelings.

I'm raising my children to know that all feelings are OK.

Crying is good. We need to express our sadness. When bad or upsetting things happen, we all feel sad. Everyone does.

Anger is fine. We are allowed to be angry. Often or maybe always, anger is covering up fear. It's also OK to be afraid. Everyone is afraid sometimes.

I wasn't raised this way, and neither was Nick. But this is how we're trying to raise our kids.

And I believe that in these small or maybe actually very big, ways I am protecting my kids.

Kids who are allowed to voice feelings and who feel heard are less likely to self-harm. I don't know if this is the same for adults, but I have to assume so.

I want them to feel safe in letting their feelings out, and to not feel aberrant for having them in the first place. And to know in their hearts that they can ask for help anytime. That help with your feelings and help with your brain are just as valid and just as normal as help with your body.

This, I think, is one of the best things we can do for prevention. We can teach people that all feelings are valid, and there is no shame in needing help with some of them.

Maybe this meandered too much. I don't know.

It's a day of remembrance for me, and a day of looking forward, trying to make the future a better one.

Because while I'm absolutely certain that it's hopeless right now, I'm just as certain it won't always be.

Told you I was appropriately medicated.