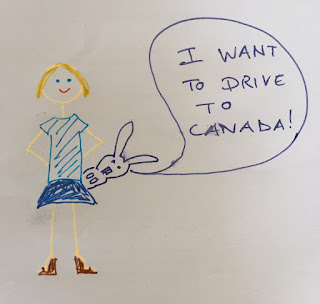 So you know how every so often I get this wild hair/hare and decide to drive us somewhere?

You may recall that a couple summers ago I was all, hey, I think I'll drive my mom and the kids to Texas! And Nick was all, "That is a VERY TERRIBLE idea."

Which was true and right and we never drove to Texas. Maybe someday.

Then last summer I suggested driving instead of flying to Denver. And when Nick was skeptical, I was all, "What? It's not like I'm driving to Texas!"

Fortunately, Nick does not die in shame at having married someone who has no grip on geography and does things like insist Denver is 1. closer than Texas; and 2. right in the middle of the country. Because, seriously, doesn't it seem like it should be? Instead of way over where it actually is?

I'm looking at a map right now, and it seems to me that Colorado should be where Missouri actually is. And you know, I'm always surprised at Nebraska. In my mind, it's wedged between Nevada and Idaho.

But back to reality geography.

Instead of perishing in horror, Nick goes ahead and points out the geography of the place on a map or globe.

The place being the country we live in. In which we live. I know, I know.

On a side bar, when Nick learned the pledge of allegiance, Nixon was president, and he thought it was, "...and to the Republic for Richard stands, one nation under God..."

And then when Nixon was no longer president he couldn't figure out why they still said for Richard stands. He never asked.

I don't actually know when he figured out it was "for which it stands".

Anyway. What this is really about is this.

I've decided to drive us to Canada!

Toronto, more precisely. Because I understand that Canada is vast. Even larger than the United States, even though some people aren't happy about the fact.

Canada is firmly north of us. There's no ambiguity with that. And Toronto isn't even that far north in the scheme of things.

So rethinking dates. Or maybe not. Basically, so far, we're driving to Canada in August.

We are going to bring our passports and ask for asylum visit my dear high school friend Sophie and her lovely family. It sounds like we'll also get to see my friend Rob. You know Rob--the one who walked all night with me in NYC.

We are, in fact, going to bring our passports just to get in. Because we do understand that it's a whole nother country.

Now, listen to this. According to Google Maps, driving time is about eight and a half or nine hours. And we are not on a tight schedule.

So we can stop on the way there and on the way back. Maybe we stop in Pittsburgh, which I've never been to.  Although that seems like it's a little out of the way.

Although not as far out of the way as, oh, Texas, for example.

Perhaps you are from or familiar with Pennsylvania or New York and have some thoughts on this? Or perhaps you yourself have driven from DC to Toronto?

If you have ideas, I'd be delighted to hear.

We have begun discussing the most important part of the trip, according to my children. And that is MUSIC.

Despacito turns out to be a must. Also Little Black Egg by the Nightcrawlers, if you've ever heard of that. I hadn't until Nick played it for Jordan and it immediately became one of his favorite songs. Also Nemesis by Shriekback, which fortunately I love. Cruel Summer by the Bangles (India's choice), also love.

Truthfully, I would have the 1980s on constant repeat, but it is not always up to me.

This is as far as we've gotten.