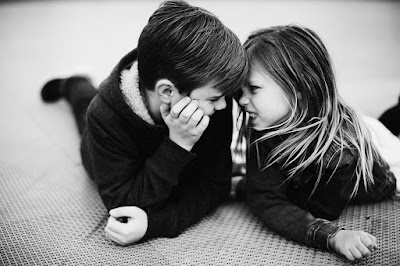 And Nick said, "I couldn't imagine being without you."

I said, "I couldn't either." And then I added, "Well, sometimes I do. But only when I'm really mad at you, and it doesn't last very long."

I don't exactly know how I used to think of love, but probably along the lines of romance, willingness to do things for others, and obligation.

And I used to invest in romantic partners, but only so far, because too far was dangerous.

The truth is, it took me a long time to settle into love with Nick. I mean, we met, got engaged, and married in under a year. I luckily got pregnant a couple months after our wedding, so we had a baby before we celebrated our first anniversary.

My love for Jordan was unabashed and unreserved well before I trusted Nick enough to evolve to that point.

For a long time—years—every time we had a big fight, I feared it might be the end.

Now I trust and believe it's unconditional.

Sometimes one of us is super crabby and behaves badly. Maybe I'm not as tidy as Nick might prefer. Maybe he doesn't come home from work when he says he will.

It took me a number of years to understand that.

Sometimes when I read something terrible that humans are doing, I say some version of, "Ugh. I hate people."

And my children correct me. "Mama. You love SO MANY people."

The last time I said this India listed the friends I made last year alone.

It is true. I love people. I make new friends all the time.

Friending, for me, is a lot like dating was.

We connect immediately, and there is a spark, and we are friends. Or it is polite and a little awkward and effortful, and I know we will not really be friends. We can be friendly, of course, but not deep and intense friends.

(I am, it has been confirmed repeatedly, rather intense.)

So today, on this Valentine's Day that people either love or hate, and frankly, I don't feel strongly about either way, I am here to tell you that I love you and I hope you have a spectacular day.
Posted by Lemon Gloria on Thursday, February 14, 2019 4 comments

How to bring the conversation back here

This is a thing I have been thinking about and don't know what to do.

So, for the last number of years, almost all my blog conversation has been on Facebook. I post links there, and then the conversation takes place mainly on my own personal page, although I do have a Lemon Gloria FB page.

But here's what's bothering me: All those comments get lost. I mean, they're somewhere in the FB machine. But I don't have them.

I don't have recommendations to refer back to, or funny stories, or random thoughts.

And frankly, I'm kind of sick of the conversation taking place on that platform.

I haven't contemplated getting off FB, because I also use Instagram and What'sApp, owned by FB, and I don't picture myself divesting myself of all of those.

But I am in a working group of parents of my son's school, and one of the moms I've been collaborating with is a software developer. And she said she just knows too much to be willing to have FB on her phone, and she does the bare minimum with it.

I am so open about so many things that I hadn't been concerned about the privacy issue.

But I have been thinking about my conversations, and how I'd  like to have them back in my own space. And I'm not sure how to do this.

I looked, and FB does not have a way to turn off comments on a post. So if I post a link, I assume that's where people will still comment.

If I don't post a link, most friends won't know there's a post up. I guess if I'd never started posting on FB, maybe that wouldn't have happened.

But I also find that I write more short, quick little posts--in keeping with FB--and fewer and fewer well thought out blog posts.

And I miss those. And, as I said, I want to take my conversation back from FB.

So if you have any thoughts on this, I'd love to hear them.

Also, in case you have been wondering, I have not been at all diligent about working on my splits or my writing. But I have significantly curbed my sweet consumption (argh! so hard!) and I've been exercising like a fiend.

I continue with my clog obsession, but not with acquisition.
Posted by Lemon Gloria on Friday, February 08, 2019 17 comments

Email ThisBlogThis!Share to TwitterShare to FacebookShare to Pinterest
Labels: blogging 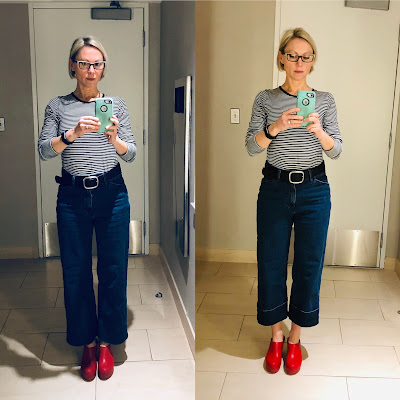 Sometimes things feel difficult and overwhelming and like there are just too many things going on for me to wrap my brain and arms around.

In these times, I like to focus on truly, in the scheme of the world, inconsequential details. Like these jeans.

My mom ordered them for herself but then they were too small, so she asked me if I wanted them. I quite liked them, although I wondered if the length was a little funny on me. I dried them on hot and they did not shrink up, which doesn't mean I couldn't get them hemmed.

I put them on and asked Nick what he thought and he said, "Those are mom jeans."

Then I asked my fashionista daughter what she thought, and she just quietly looked at the floor. I told her it was OK if she didn't like them, because I like them, but I was wondering her opinion.

And still she looked away.

I wore them anyway. I think they're cute. Although the mom jean thing is weighing on me, even though I'm a mom.

Also! I am unsure about the length.

I do realize that my work bathroom is not the ideal place to take flattering photos, and there is maybe a weird monitor thing going on with the stripes on my shirt, but life is life.

Also, I got these red clogs for Christmas and I am pretty fixated on all things clog right now.

They have been compared to Pope Benedict's red loafers—to which my friend Randy adds, "blood of the martyr!"—and Dorothy's ruby slippers.