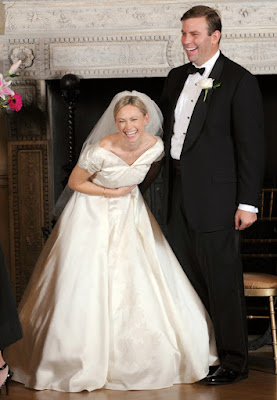 Today is the day, 13 years ago, when we stood up in front of so many loved ones and promised to love and I honestly can't remember what else (although I know for a fact that obey was not in there) forever and ever.

This was right after the exchange of rings or maybe between rings, and is possibly my favorite photo of the two of us.

I remember female family friends telling me to marry a man who made me laugh. (One mom told me to marry a nerd, because nerds make the best husbands.)

At the time, or those multiple times, I imagine I was like, uh, I really just want to marry someone cute who takes me out for nice dinners. But as it turns out, I married a nerd who makes me laugh, and I probably should've listened to way more advice from the moms in my life way earlier.

We asked an old family friend to marry us, which meant getting some kind of internet minister certificate. Which he got but then DC somehow made approval complicated.

And DC also wanted us to get tested for syphilis before they would grant us a marriage license.

Neither of us objected, and both our primary care doctors said they were happy to give a blood test, but then were like, an official form? To prove you don't have syphilis? Where does one find this form?

The DC getting married instructions said doctor's offices would have such form.

They had no idea. We had no idea. It was all proving more administratively complicated for our minister and us than it seemed it should be.

And time was ticking.

So in the week prior to the wedding, we got a marriage license in Alexandria, and headed to the office of a lawyer in Old Town who would marry us.

You drove, and as you parked you said, "Watch the door."

I was like, "Yes, yes..." Because let us be frank: you are a person who gives instructions like, all the time.

I barely knew you and I knew that.

And then I opened the car door without paying attention and slammed it into the metal post that you were trying to get me to avoid. It made a big dent.

You came around to my side and yelled, "God fucking dammit! I told you to watch the door!"

So I said I'd pay for it, which didn't make an sense because all our finances were about to be joined and so if I was paying for it, you were paying for it. Which you pointed out. You were still mad.

At which point I started to cry and said I didn't think this was a very good way to head into a marriage.

So you apologized for getting so angry and I apologized for ignoring your request and subsequently walloping your car really hard with an iron pole, and we headed into the lawyer's office.

And then some shockingly brief amount of time later, we were actually married.

It was so easy I was wondering why neither of us had ever done that before. (Ha! I'm kidding.)

But for me the day that matters is the day we spent with our loved ones surrounding us. Which was today, 13 years ago.

I look at the photos and I see the faces of people we dearly loved who are no longer with us. I see people we love and still have in our lives.

I am so grateful they were there with us.

So, I think we would both agree that 13 years is no small chunk of time.

This morning I said, "Happy anniversary! I'd marry you all over again!"

As I was giving you a kiss, Jordan said, "Yeah. Some days I'm not so sure that's true."

What I did not understand before marriage was that staying married turns out to be a choice you make repeatedly. Some days you're in harmony and life flows and is easy and joyful. And some days are hard. Sometimes those days turn into weeks or even months or longer.

Marriage, it turns out, at least ours, is playing the long game. I never had a long game before.

Sometimes, in our marriage anyway, one might spend months of their first child's life awake and seething at night, dividing up the furniture. Sometimes one's husband might be mad at them for pretty much an entire year.

Sometimes one might consider and perhaps even discuss not being married, and then decide together that in fact, the two of you would prefer to slog through whatever it might be together.

This turns out to be remarkably satisfying.

And sometimes one of you is having the hardest time ever, and the other is there to support you through it, no matter what.

I never had this kind of certainty.

Today I'd marry you all over again.

I'd just be more careful about the car door.

Email ThisBlogThis!Share to TwitterShare to FacebookShare to Pinterest
Labels: love and happiness, wedding

If you know me, you likely already know my story. You know my dad died by suicide in 2006 after multiple attempts.

This was how I told people. Maybe you were one of the kind people holding their breath, praying, sending love, waiting for news.

I make a point of talking about mental illness and suicide like everyday topics.

I can't talk sportsball, but I can engage in a lively conversation about antidepressants.

(Is that depressing? I honestly don't know.)

Sometimes I think about how different my life would have been if, after my mom and I found my dad after his first attempt, we'd actually talked about it. What if, instead of telling us that we could never talk about it because it would hurt his career, Dad had sat down with us and discussed his struggles?

My sixth grade would've been a lot easier. My everything would've made more sense.

What if I'd grown up in a household where all feelings were considered valid? Where there was no shame?

In the Before times, my son taught anxiety-reducing techniques to other kids at school. I heard from a teacher that he said, "Do you want me to show you something I learned in therapy?"

I was so proud when I heard this.

He talks about therapy like it's normal. Because to him it is. Because that's how we treat it. Like going to any other doctor.

I would love to live in a world where we treat mental and physical ailments with the same degree of normalcy.

In Covid times, I know that these calming techniques, that mental health help, are that much more necessary.

My shrink and my acupuncturist told me they've never worked so hard as in these times. Everyone has been in crisis. I have friends who have never, ever manifested anxiety or depression who have struggled with one or both in this pandemic.

I think of how alone, truly, physically alone people have been in this pandemic. And how even the introverts among us need to not feel alone. We may get over-peopled, and we may need more time to recover from people, but we still need to be heard and understood and loved for who we are.

Recently a dear friend who I haven't seen in person in decades reached out. A friend, though not a close one, had died by suicide. She was wondering what to say to the family. How to talk about it with kids.

She was gutted. And she wasn't close to the person.

She said that if I didn't feel like this was an OK thing to ask me, she understood. She just thought she'd ask, as she trusts me.

I told her that honestly, this is what makes suicide loss different. It's hard to ask about. People don't know what to say.

Even people who weren't close to my dad, or who hadn't seen him in years, decades even, told me they felt like they should've know. Maybe there was something they could have done.

Suicide wrecks the loved ones left behind. It crushes families.

I told her the same thing I have told others: tell the family you are so sorry for their loss. Offer to be there for them--an ear, a meal, coffee, anything.

The fact that you are there for them, not avoiding because of Suicide (whispered, but also with a capital letter, so I guess whispered meaningfully), means a tremendous amount.

Because we as a society don't know what to do with those left behind.

But before we get to that point, we don't know what to do with those who are struggling.

Mental health services are expensive. And they are stigmatized.

Depression is often treated as a choice. Cheer up! Shake it off! Go out and get some fresh air! Watch a funny movie! Don't be so down!

(I haven't heard these things in a long time, but if anyone says them to you, you have my permission to offer them a refreshing cup of nut punch.)

I have a lot of feels about this, as you may know.

What I want everyone to know, to feel in their core, is that all their feelings are valid. Your life might not be as hard as someone else's. Your depression or anxiety or anything else you are struggling with might not make sense.

Anxiety? Anxiety is such a tricksy fucker.

Now that I think about it, I have been told to calm down. I've been told that a lot. To stop worrying. Everything is fine.

But if it's not fine in your being, it is not fucking fine.

Or all of those things. Or none of them, but other things.

(Feel free to use these words with someone you're worrying about. Asking someone if they are considering suicide does not put the idea in their head. If it's an option for them, it's already there.)

A brief list of resources, should you or a loved one need them

If you hate to talk on the phone (raises hand) and want to chat online: https://suicidepreventionlifeline.org/chat/

If you want more info, the American Foundation for Suicide Prevention (AFSP) website has great resources. This page deals with risk factors and warning signs.