Eleven years ago today, May 15, my dad disappeared.

Other years the anniversary has fallen on other days. I do understand that's how the calendar works.

But this anniversary is Friday-Saturday. Just like it was when my dad left us.

Beautiful and sunny, lush and glorious, with the rich promise of summer, also like today in DC.

Too beautiful a day to die.

I like to use this photo of my brother and me standing as my dad plays piano in Bangladesh.

But I think about his death sometimes. Not all the time, like I used to. Just sometimes. And particularly today.

With all the news about intubation lately, I think about signing a paper in the ER saying we understood the risk of death when they switched the emergency tube inserted by the EMTs to a longer-term one that would keep him breathing in the ICU.

I think about begging and hoping and praying that he would live.

I think about holding his hand, watching him carefully while he was hooked up to machines that made sure he breathed, that monitored his vital signs, that did whatever else one does to keep a body alive.

And then I think about the last time, about knowing in my heart he was gone, but hoping and praying I was wrong.

I think about waking up to no news on Saturday. About Nick driving and me calling hospitals as he drove, because we needed to be doing something, not just sitting, waiting for a phone call.

I think about the sun streaming through the windshield, and how big and uncomfortable my belly was in my lap.

When Nick suggested we call the morgue, I made him talk. I think about listening to Nick, on speakerphone, persuade the man at the morgue to tell us whether or not they had my dad.

I remember not being able the breathe, and the kick in the gut feeling when he said yes, they did.

I remember wishing I could tuck my knees up and curl into a ball, and knowing that would be impossible even if we weren't in the car.

Typing this, I feel my breath quicken and my tears sting.

Everyone says time helps. You get so tired of hearing time helps when you are stuck in the moment, and the moment hurts so much, and you can't do anything to speed up time.

You get tired of people moving on before you have. You get bitter when people you love think you have grieved long enough.

But here, eleven years out, time has helped tremendously.

Now I can think more about good times and funny stories. I try to share with my kids stories that show my dad as a whole, real person.

One day I'll tell them the story of Nick and my dad bringing Nick's boat across the Chesapeake. The photo above is from their lucky safe arrival.

It's not that we had all dark times. We had a lot of fun, and uproariously funny, times. We just didn't have a lot of calm in between times.

I am like him in this regard. I work on this.

This year for the first time, Dad has started appearing in my dreams. Really it's been since Covid19 hit. I don't know what this is about, but he's alive and my dreams, while chaotic, are not tragic.

He's still a very complicated figure for me, but I take this as a sign that I've moved into a better place with all of it.

He left us on a Friday. They called the time of death on Saturday, but we don't actually know which day it was. So for me, it's a two-day anniversary.

I knew he was gone.

And still, when we called the morgue and they said yes, yes we have him, it was still somehow a huge shock.

And here we are now, eleven years later.

My friend Vik just texted me *hugs*, the way he does every year on this date. And every year, I feel hugged and loved.

It's a spectacular, sunny day. I'm going to train my dog. My kids are doing their distance learning lessons, and then this afternoon we'll go on a walk. They'll run and fling themselves to the ground among the buttercups.

The azaleas are glorious. The dogwood are blooming. Roses are so fragrant you can smell them even through a mask.

It's a beautiful day for an anniversary.
Posted by Lemon Gloria on Friday, May 15, 2020 6 comments 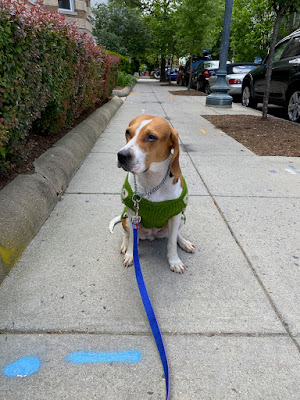 Honestly, I need to be able to breathe when I sit down.

It's no mystery how this happened.

A few weeks ago I started eating a lot of bread. Like, a lot.

I know many people are baking. We are not. We are supporting the local farmer's market bread stand. We have purchased a great deal of bread.

Seriously. I don't even want to tell you how much. We have been all, support the community!

Generally, in normal life day-to-day, I don't eat much bread or pasta or really any simple carbs except for like, chocolate or sugar injected directly into my veins.

But those would be balanced out with the amount of walking I did.

Now I eat bread and do a lot of bottom sitting.

Oh, and I train my dog. Every day.

We are all distance learning up close and personal. The kids, Wanda and I, all together and separately till death us do part.

Wanda failed the week two test, which was to walk next to me in a straight line for 15 steps and then sit on her butt of her own volition.

Wanda was like, I do not want to sit on my butt, thank you very much.

To which I was all, here, let me help you.

But by that point she should've been doing it with no help. Just, you know, me saying, "Sit!"

I tried Jedi mind tricks. One time we went for the sit and she looked like she was going to do a perfect sit. And then she continued until she was lying flat all comfortable on the warm pavement.

She is not a large dog but I am not a large human and I will tell you that when she doesn't want to get up it is not the easiest thing to get her up.

You have to submit videos a couple times a week and then one of the end of the week test so that Mark, the trainer, knows that you are ready to move on.

Wanda and I were stuck in week two for a few days into week three.

But now we've almost caught up, and she does some good sitting and staying. We even impressed people in the park the other day.

Today's our meeting for week four. We haven't yet done the week three test, which I hope to submit tonight.

One of the challenges, as I believe I mentioned, is getting a child to cooperate enough to video. And to focus on us rather than the adult humans clad head to toe in tie-dye performing skateboarding tricks.

When Mark said we needed to train around distractions, I cannot imagine he meant clowns on skateboards. My kids were certainly distracted.

So Wanda and I might actually do the exercise correctly but the video shows...the skateboarders, the very interesting crack in the sidewalk, and a close-up of my butt.

Honestly, I know, I do, that it's fucking tedious to stand there while I back up to five feet and then count to 50 Mississippi (which to spell I always have to do the M-I-S-S-I-S-S-I-P-P-I, but is fortunately not Massachusetts, which I find impossible to spell on my own).

But look at that good sit stay!

Anyway. I now have watched my butt walking away from the camera and bending over to do the two-handed presentation to get my dog to sit and honestly if I never watch a video of my butt again that would be just fine.

Oh! And as it turns out, when Nick does these videos for me, there is also a focus on my butt. But clearly this is a choice and not a height issue. I'm...flattered?

I don't want to grow out of my real jeans. Not my spandex jeans that make me feel better.

So I am trying to rectify this.

But honestly, who wants to eat salad when the world is going straight to hell?
Posted by Lemon Gloria on Wednesday, May 13, 2020 1 comments