Let me explain...No, there is too much. Let me sum up. 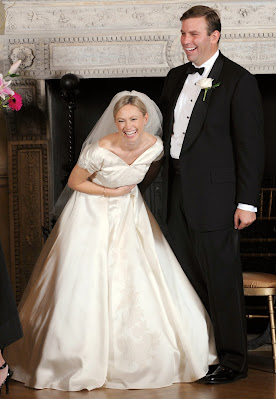 I woke up this morning thinking about how to write about 14 years of marriage.

When I was younger, even past the age where I thought my freckles would magically disappear when I was all grown up, I believed that marriage would make me happy. Like, the fabric of my universe would fundamentally alter and I'd be happy.

Even though I was unhappy much of the time--something that would change with therapy and meds. But not for years and years.

And then you add small humans into the mix, and the various stresses of jobs and life, and harmony becomes further complicated.

It would've been helpful for me to know ahead of time that in our marriage we could have tremendous, enraged, yelling disagreements and still ultimately be OK.

I wish someone had explained to me that there could be an entire year that would suck, but then a really good year could follow it.

Recently a photo from our trip to Maine in 2014 popped up. We were laughing, looking so happy. And I remember what a horrible time you and I were having that summer. In fact, that whole year was wretched.

We discussed divorce. And then decided to affirmatively work on our relationship.

That was six years into marriage, and here we are eight years later.

Which is not to say that it's all been sunshine and puppies. More that we have ups and downs but agree that it's something we both think is worth working on.

Because, jeez, loving someone and being harmoniously married to them are two different things.

At some point you told me that me joking about stabbing you really bothered you. So I no longer joke about it in front of you.

(Although please understand that I don't actually trust women who never admit to feelings like this.)

But, anyway, the other night we were sitting on the couch annoyed with each other about, I don't even know, something, and you made a Lisa face and said in a falsetto, "I'm going to stab you!"

I laughed and laughed. I don't honestly know what we'd do if we didn't find each other funny.

Today it's been 14 years since we stood up in front of so many loved ones and promised to love each other forever and ever or something along those lines. I loved our simple vows; I just don't seem to have a copy.

Honestly, I think the idea of committing forever is a daunting one at the outset. I see how it promotes societal stability, but practically speaking, it's kind of weird.

Which is not to say that my goal—which I know is our shared goal—isn't forever. Our hope is till death does us part. We sometimes joke about the other going first and what we're going to do when that happens, and other people don't seem to find those conversations as funny as we do.

But back to forever: it's more like how do you pick one person whose jokes you'll want to hear, whose hand you'll want to hold, whose air you'll be willing to breathe for the rest of your life?

It's such a leap of faith.

And then a lot of work. I mean, I suppose if it's work to be together at all, then it's just the wrong thing. But it's work to communicate effectively. And to listen to the other person and try to understand where they're coming from.

I think what I find most important, and maybe most interesting, is the ability to see you for who you are and accept all of you despite the parts that annoy or frustrate me.

The things I love and admire about you are the easy things.

This is not something I thought about prior to marriage.

I didn't anticipate having to grow so much. I had no idea I'd need to learn so many skills in order to advocate for what I want and actually hear-—not just listen to—what you want. I didn't think about needing to work as a team to achieve shared goals, like raising secure children.

Who knew we'd need to work so hard to build something together? I'm still my own whole person, as are you, and then our marriage is this whole entire, I don't know, thing unto itself.

I don't actually care about cut flowers or chocolates or fancy dinners. Gifts, as it turns out, are not my love language.

I don't know what other marriages are like, or what other people like about their marriages. But one of the things I appreciate so much is knowing that you always, always have my back. I'm independent, but I'm not alone.

We are in it—and what "it" is varies—together.

What I want is to be seen and heard and loved for who I am. Because of and despite who I am, as an entire, multifaceted person. I want to feel secure in the knowledge that that love is not predicated on me looking or behaving a certain way.

And in this, I have what I want. (Although I'd never turn down chocolate. Or a ticket to Cartagena.)