2019: Yeah, trust issues, not to mention they say they can smell your intentions 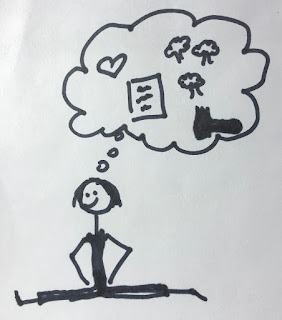 Hello! I am squeaking in under the wire for January 2019.

Do you typically set resolutions (or intentions)?

This year, rather than resolutions, I set some intentions.

Last fall, I started doing yoga, and one of the things I really like is that at the start of the class, the instructor has us each set an intention for the practice.

She says maybe you want to let go of something that no longer serves you. Maybe you'd like to make space for something you want to invite into your life.

Often, my intention is explicitly to let go of anxiety and make room for creativity.

Sometimes I focus on opening my heart to family. I work on letting go of anger, and making space for love.

And with this now practice in mind, I set intentions for this year, with the understanding that they are flexible, and that I can always work to let go of the negative and invite in the positive.

Some of these intentions are very specific and not spiritual.

Like, I want to be able to do the splits. Don't laugh.

And I want to get two pieces of personal writing published this year. Last year, I got this one published, and I still feel very proud of it. This year I will focus on submitting, with the hope of two published pieces.

I am also focusing on eating healthy, on being mindful, and trying to get enough sleep. Health all around.

On January 1, Nick and I both started Weight Watchers.

I do not, as a deliberate practice, weigh myself, so I don't get all cucu-bananas obsessy about numbers.

As such, I didn't realize that I'd gained about 20 pounds in 2017. Maybe it started a little before that, and maybe it continued a little after. But most of it, I have decided, happened that year.

Then in 2018, when I went back to an office job, I had to buy new pants. Because none of my pants fit. Which I'd avoided noticing at home, because I just wore stretchy pants all the time. And OK, some of them had gotten tight, but they were still stretchy and  relatively comfy.

So the come to pants Jesus moment was really when I had to dress presentably to go to the office and had no pants.

For about a month, I cut out sugar entirely. I did this because I saw a functional medicine doctor who told me a lot of things and put me on an anti-fungal and said I couldn't drink alcohol or eat sugar for a month.

My intention was to avoid sugar as a practice, like, forever, after that month was over.

So I was done with the ice cream. This also got rid of my brain fog, but that is a whole nother story.

But then after that month I found dark chocolate. I decided that if I ate dark chocolate rather than milk chocolate, I was barely eating any sugar. Particularly paired with almonds, which are protein.

And as my friend Alexa says, dark chocolate almonds are basically medicinal.

Trader Joe's has these dark chocolate almonds that come in a delightful little container that's actually not all that small.

I could easily go through at least two of them a week. Because I am by nature a "more is better" kind of person.

I am currently trying to be a "moderation is awesome" kind of person.

But I digress. I basically felt rather virtuous, with this new dark chocolate almond obsession, which was not, after all, a pint of ice cream a night.

And still, my old clothes, which I should really just call my clothes, because they are not old, and they all fit until I ate approximately 365 pints of ice cream in 2017, did not fit.

Last month, I went to put on a skirt for my office Christmas party. A skirt I had worn in the past. And there was no hope of hooking it. Not even with sucking in my breath and never exhaling. It was like one side kind of waved at the other and then they both shrugged and that was that.

Instead I wore a wool dress with Spanx and holy cow do Spanx not spark joy.

Anyway, that's how I came to that intention, and the fact is that Nick and I are both already feeling a lot better for it.

He gets to eat way more than I do, and has lost twice the weight I have since January 1. This is because he is a large man and I am a small woman. Also, it is worth mentioning that his end weight goal is approximately twice my end weight goal.

But this forced mindfulness has been a great shift.

A further intention is to eat a more plant-based diet. Now that Nick is open to more beans and vegetables, this is both an appealing and realistic goal in our household.

My overall intention is to tread more lightly on the world, so that we might leave more of a healthy planet for the future.

And these are my current intentions.

(Also, I am also thinking about clog boots, which is why I included them in the drawing. But they're wants and not intentions.)
Posted by Lemon Gloria on Monday, January 28, 2019 1 comments

Email ThisBlogThis!Share to TwitterShare to FacebookShare to Pinterest
Labels: health and compulsions

The difference between us

Nick will meet people and have a long conversation and then when I ask things like where they grew up or what kind of movies they like or what their hopes, dreams, or fears might be, he has no idea.

And then I am all, "SO WHAT DID YOU TALK ABOUT?"

Also, we have this mouse problem. Or rather, as I mentioned before, a mice problem.

I know this because multiple people have told me so and also because Nick did kill one mouse, practically with his bare hands, and I am not even kidding, and we thought the problem was resolved.

But it was not.

And Nick was unconcerned, because, as he said, it's very cold outside and they are coming in to get warm.

We had a period of no mouse, and then the other night I saw a mouse dart by, and then in the morning I saw a poop in a pan and I said it was time to get an exterminator.

Clearly our traps and poison aren't working. We have been Clorox wiping the stove and vacuuming up crumbs, but the fuckers persist.

So I said enough is enough, we need to get serious. And Nick said, "Let's call Joel."

We have this fabulous person named Joel the Bug Man who is hilarious and delightful and also great at getting rid of bus.

Also, at one point we had a very difficult tenant who we didn't yet know would be extremely problematic, and when Joel came up from treating her apartment he said, "That woman is insane."

He turned out to be right. So I have a lot of faith in Joel. But, I wondered, did he do mice?

Nick made fun of me for this and really kind of made me angry in the process, and then he called with great dramatic flourishes and left a message about the mice.

And I was all, "One, you're being an asshole and two I bet he will be like MICE ARE NOT BUGS and not even call you back."

So a day later Nick called to say Joel was coming over. To deal with the mice.

"Yeah. Like was he all, 'Don't worry, I'll get those disgusting little bastards!' Or, 'I've got mad mice ninja skills!'--something like that? What did he tell you?"

"Uh, he said, 'Do you need me to come today?' and I said, 'That would be great.' And he asked when it started, and I told him relatively recently."

"That was it. He said nothing about mad mice ninja skills."

Out of the Darkness Overnight video

Hello, friends! This Out of the Darkness Overnight 2019 promo video just came out, and some of my teammates and I are in it.

This video makes me tear up. I don't know if it has that effect on other people, but it really gets me.

I'll be walking the Overnight in Boston this year, and I am already excited.


My voice is the first voice you hear, and as soon as the video began I was like, oh wow, that's me! And then my next thought was, man my friend Cynthia in college's boyfriend was totally right and my voice really is high and shrieky.

I forget about my voice, because honestly, how often do you hear your own voice?

I mean, except in your head, over and over, repeating phrases like, "Put on your socks." and "Please brush your teeth." and "For the love of god we do this every single day why why WHY is this a conversation?!?"

But though I get sick of the sound of my voice, since I rarely hear it outside my head, I forget that I have never liked it.

When I have a bad cold and both of those things happen, I wish my voice would stay that way. But in the scheme, this is small.

I have a New Year's post written in my head but it hasn't made it into cyberspace but if I can get it up before January ends, I'll consider it a win.
Posted by Lemon Gloria on Friday, January 18, 2019 6 comments