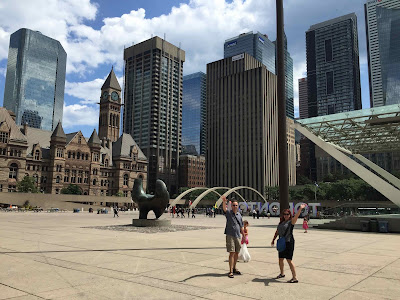 Last night I suggested driving Betty and the kids to Duluth, MN this summer to visit my cousins. It couldn't be a whole lot farther than Toronto, could it?

You may recall that I occasionally decide it would be really fun to drive somewhere. Like Texas. Or Denver. And then Nick points out the distance and difficultly.

When I pulled it up on Google Maps it said it would take me 378 hours. Then I realized it had defaulted to the walk option. (Also, I'm a fast walker, and am confident I could do it in like 350 hours.)

But. I still haven't told you about last summer when we drove to Canada!

We drove to Canada. My car was in park when I took this picture. 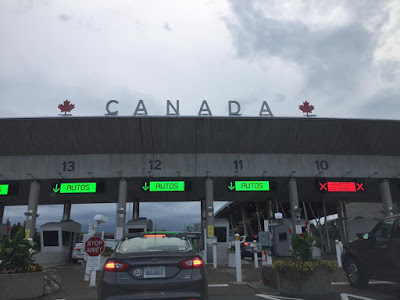 Last August, Betty, the kids, and I set off in the direction of Toronto. We had Waze, passports, Kindles for the kids, a giant bag of snacks, and the Hamilton CDs.

We figured we'd get as far as we could--hopefully Buffalo--sleep the night, and then drive to Toronto the next day. I was going to call Nick when we knew where we'd stop for the night so he could get a deal on reservations online.

About an hour out of Buffalo I got the kids to get out of the car and use the bathroom at a very clean convenience store by saying, "Nana will buy you candy if you try to pee pee."

I'm not proud of this, but it worked, and let me just be totally honest and say I am not above blatant bribery.

Nick asked if we could make it to the Canadian side of Niagara. I polled my passengers, who said, "Sure!" So I said, "Sure!"

We were super bummed that they didn't stamp our passports at the border. We also didn't jokingly ask for asylum. Best not to push the humor with border police.

I mean, I it's all fun and games until you're in isolation getting a cavity search.

So I just said we're here to visit old friends and we'll be staying for five days and then heading straight back home and thank you very much for letting us in.

The next thing I did was get stuck in the E-ZPass lane for the toll. I was all, "Look, they have E-ZPass! I have E-ZPass!"

But! I don't have Canadian E-ZPass! I...couldn't pass. And then a van pulled up behind me. And I got all panicky. Then the van driver signaled for me to back up, and I was trying, but I am a sucky backer-upper and there wasn't much room.

And then a lovely man opened the gate for me and we drove forth into Canada. EZ!

Nick had booked a room with a spectacular view. 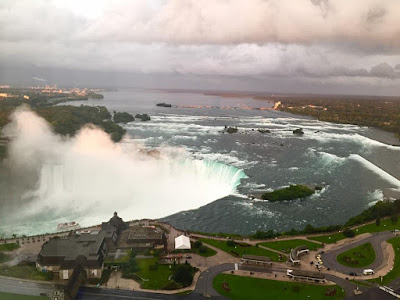 Right? We were astounded and delighted. 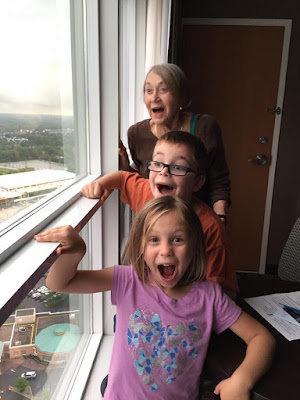 Our room had a better view than we managed anywhere else. Also, they light the falls different colors at night.

And then! Then Toronto! Oh my gosh, Toronto is incredible!

We headed straight for Sophie and Sean's house. Sophie had organized for us to stay the house of one of her friends who was away for the week. So we were super comfortable in a truly lovely nearby  house.

Sophie, one of my dear Delhi high school friends, immediately poured us wine in cups from her childhood days in Pakistan. Sean grilled. Our children began playing with each other. 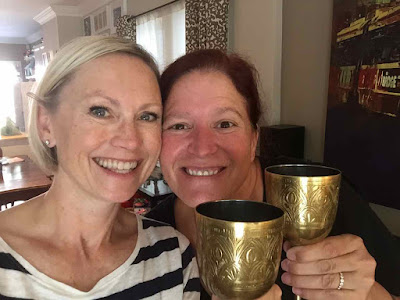 It is as I have long believed: Canada is a magical land.

They taught us how to ride the streetcar. Toronto has amazing public transportation. 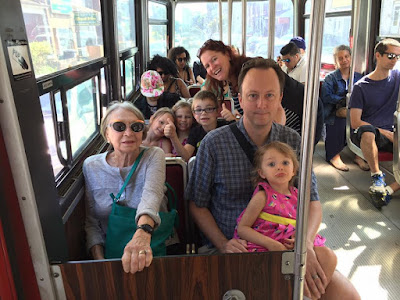 We went out for dim sum. The kids tried everything. Everything!

We went downtown. We hung out at the Toronto sign. We shopped. 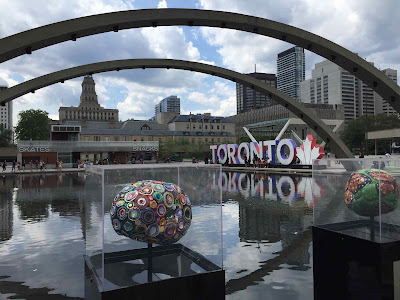 We took the kids to the local park, which has a wonderful playground with a splash park, a skating rink, and a pool. And a farmer's market on Wednesdays!

We went to the Don Valley, which houses an old brick factory. It's a gorgeous, giant park right in the middle of a huge city. 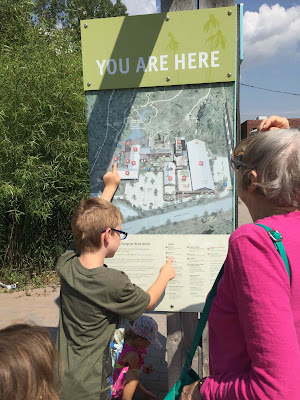 One night our high school friend Jon and his lovely wife Christine invited us over for a cookout. They built their house to back up to their best friends' house. Between them they have two yards, a trampoline, and a heated pool.

Also! We had ice cream with maple sugar. Which is what I imagine pixie dust tastes like. 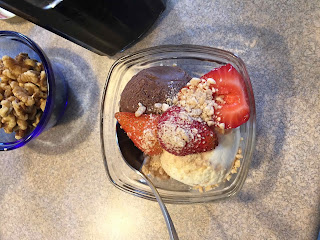 My kids never wanted to leave. According to my children, Oakville, suburb of Toronto, is the best place in Canada. 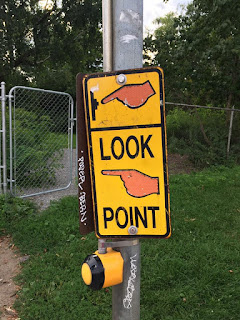 This is how you cross the street in Toronto. You push the crossing button and you point. All the way across. I am not kidding.
Sophie's neighborhood has everything. My friend Rob, who you may remember from my NYC Overnight walk, came down and joined us for a delicious dosa dinner.

One night we walked over to a local brewery. While we were there a new brewery opened up across the alley from Sophie and Sean. Our last night, we tried poutine.Yum!

Sophie and her family were the most extraordinary hosts. Toronto is an incredible city. We all loved it. I could spend so much more time there. And now I know how to drive there and back.

I've been doing a self-paced online parenting class, and watching parenting videos, and reading parenting articles. (Honestly, I'm trying to be a better parent than I've been. A really good, loving parent, who doesn't lose her shit.)

And I'm in a six-week online writing group focused on using time effectively, and how to create writing space in a busy day, and fashion a writing life for yourself. (Here sometimes I'm like, do you actually need to write your story? Maybe you should stop and  just live your fucking life. Although I'm not quite sure what that means, as I don't know how not to write.)

I parent daily, hourly, minutely (hey--I just realized! minute+ly! minutely!), with varying degrees of skill and success. And I try to write almost daily, although I haven't been writing here.

Both of the activities I mentioned meet in Facebook groups.

Actually, I'm in another Facebook group, a workout one, where we post daily status updates on our workouts. Or our boobs. Peri-menopause symptoms. New jobs, injuries, disappointments. Life. But my friend Wendy started it originally as a workout progress group.

You know, I think my blog used to be kind of my own personal life progress group. I used to write here daily. But I also used to feel like interesting things used to happen to me daily.

Now I feel like there isn't enough compelling stuff to write about, and I worry that everything funny or interesting that was ever going to happen to me has already happened. That's a grim thought, isn't it?

But I do also wonder if the issue is more that so much life happens all the time, and I don't necessarily have time or energy to tease out the interesting bits.

Oh, because have I told you that it doesn't matter how long I sleep, I never wake up refreshed? This has been going on for years now.

About two months ago Nick left me to sleep until I stopped sleeping. Which was noon. I'd slept for about 13 hours.

So in December I went to a functional medicine doctor, which is the term for an MD who looks beyond Western medicine and incorporates herbs, acupuncture, etc into her treatment plan.

This doctor took my blood, had me do a test where I had to fill a tube of saliva at specific times during a day, freeze them, and ship them off to a lap. I also had to give five days of stool samples. I'd done this plenty in my youth, but this whole process has gotten a lot more particular and hygienic since then. You mail those little suckers off as well.

In any case, I did all this and as it turns out there are a variety of biological reasons that I have absolutely no energy and haven't since I got pregnant with Jordan. Seriously, she asked when the last time I remember not being tired was, and my best guess was nine years ago.

It's always nice to have someone tell you that how you're feeling is valid, you know? It's even nicer when that person follows it with, "And I can help you feel better."

It felt like when I first seeing a therapist. I was in such a low place that just knowing that someone was going to help me gave me this overwhelming feeling of relief.

But I actually think my brain is less cloudy when I wake up in the morning.

For a long time, I'd wake up and I'd shake my head in the same way I shake my phone when it's moving slowly even though I do understand this is a pointless gesture. I know it won't help, but when my phone screen is spinning, I shake it side to side to hurry it up.

I often feel that same impatience with myself, honestly.

It takes me a while to get my bearings, and feels like surfacing from a very deep water swim. I can see the light and the air, it just takes effort and time to get to the surface and be in the present.

It has only been a week but I do think this is improving. I don't think it's my imagination, though I am totally suggestible. If you tell me that some wine has hints of tobacco and forest leaves, I will definitely taste them. I suppose this is why I could be semi-hypnotized all those years ago.

Anyway, I wouldn't say this essay has a point except to say that like everyone, I am juggling all these pieces but most of them are internal.

So it's not like I'm some important CEO and my helicopter picks me up at 7:00 am and I have a day packed with meetings and important decisions and whatever. I mean, we all know this.

Mainly I have all these small, quiet issues and projects that need my attention. I mean, I am one of my ongoing projects at this point. And then I also have these large and growing, loud things I like to call my children who need more of my attention.

And I'm trying to be present, and interested, and praise them for their effort and not for just being smart. And to give them special time. And to connect with them by walking to the room and looking in their eyes at their level and putting my hand on their shoulder, thus upping the likelihood of cooperation.

And when I do this and my daughter, who is five, rolls her eyes and says, "I don't want to. I'm not going to," it makes my head completely fucking melt.

Last night I yelled, and I yelled loudly.

I still feel bad about this. This is not the parent I want to be.

What I suppose I am saying is that I am not fully the person I want to be, but I am trying. I am working at it one little bit at a time.

It's Monday, and I'm doing my best. I like to believe we all are, though that thought has been sorely tested of late.
Posted by Lemon Gloria on Monday, January 22, 2018 4 comments