A twofer of sorts

Most of the time I do not give my boobs any thought.

It's kind of like how I feel invisible when I'm out running, and then am always shocked when someone I know mentions they saw me.

I don't think about them, therefore they're not.

I mean, obviously they're still there, but not in a way that is of particular interest to me. Except sometimes, when I fixate on their no-longer-perky-little-cupcakeness, and then google breast implants.

What I want, really, is just a little scoop up where it used to be. Or rather, two. One on each side. That is all.

But there are more pressing things in the world to think about, and I spend the bulk of my anxiety on my children, my family and loved ones, and on the crisis state of our country and the world.

Lingerie was a priority for me for a while. Mainly in my 30s when I had some money and there was no consistency in who might be seeing my undergarments.

And here I will say that I hit one of my lowest points in underwearing in my 20s, just out of grad school. I was in a state of semi-undress with a guy and then realized that one side of my underwear was held together by a safety pin.

And I was all, "Oh, god. My mother would die if she knew I was wearing such terrible underwear." And then he was all, "Why are you talking about your mother?"

It went no further than this. I'm pretty sure I threw out those undies after that. But it's also possible that I didn't.

While I was pregnant and had young babies, I wore very practical maternity or nursing bras. And then when I was done nursing for the second time, and ready to go back to my beautiful bras, there was a lot of space between where my boobs ended and the bras began.

Post-two-baby-nursing, instead of embracing the boobs like a kind hug, my bras regarded them like a picket fence might gaze at the house across an expanse of yard.

Faced with replacing them, I discovered the joy of stretchy sports-y bras. Not with the stern construction and constraint of running bras. But made with lightweight fabrics and thin straps.

These bras have a good shape, no wire, no hooks. They're extremely comfortable. The have optional pads for warmth/looking like I have actual boobs.

Still, every once in a while, I do think about breast implants. I have friends who are utterly delighted with them.

Would I be utterly delighted to have some semblance of my old body back? To occasionally, with the right bra, have cleavage?

But then I think, besides the cost, and really, even bigger than the cost, is the fact that it is surgery.

They put you under. General anesthesia is no joke. It's a big deal.

My friend Maude had cognitive impairment after anesthesia. It is rare, but it does happen. And her surgery was not elective.

What if something terrible happened, when it was something you didn't need to do in the first place? You were altered for life because of something totally frivolous?

I decided no to breast implants. Absolutely not.

And then I realized that in the next couple years, I'm going to need to have a colonoscopy. They put you under for that as well.

So if there were a way to do them at the same time, then I'd only have general anesthesia once, for a non-elective procedure!

I told Nick I just need to find a way to simultaneously get the colonoscopy and breast implants.

He contends that finding this surgery combo seems highly unlikely, even impossible.

I concede that he is probably correct. In the meantime, I'm going to get an attractive lacy bra or two. They just need to not itch.

Boob itches are the worst.
Posted by Lemon Gloria on Wednesday, February 22, 2017 6 comments

Email ThisBlogThis!Share to TwitterShare to FacebookShare to Pinterest
Labels: boobs, health and compulsions 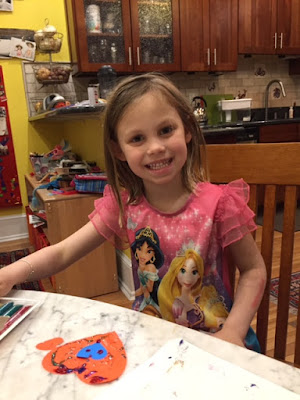 India wanted to make her own valentines this year, so yesterday we bought fun colored paper and all these glitter glue pens.

What is it about glitter that makes it so endlessly compelling? Who can pass it up? Not us.

(And now that I say that, maybe it is like trauma memoirs, and not actually a universal preference. Whatever. I love the glitter.)

India threw herself into the project with delight. I cut out the hearts and she went about layering colors of glue all over them. They were all abstract, save one.

"Oh, India, your valentines are all gorgeous!" 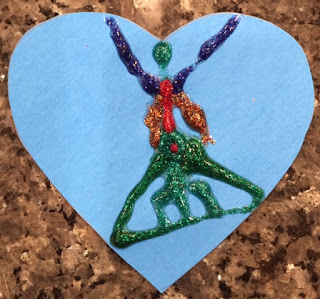 "I particularly love this one! Is this a dancer on this card?"

"Well, to me it looks like a beautiful dancer!"