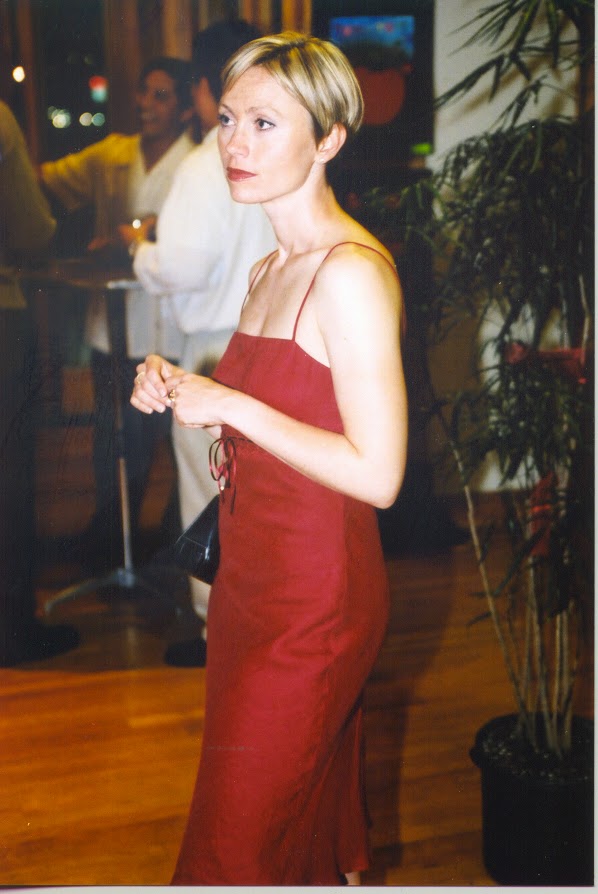 Here's why I ask. I came across this picture - taken ages and eons ago at my brother's wedding reception. It was taken by their photographer, and when they got the pictures back they liked it so much they framed it.

It's one of my favorite pictures of myself. (Me? Myself? How do I not know this? Gah!)

In any case, I stumbled across it and put it up on Facebook as my profile pic. I like it, why not? I'd bought a special dress for their wedding party (they'd eloped months prior). Plus, it was my brother and sister-in-law we were celebrating!

Now, my friends have said some tremendously flattering things about this photo. Only one of them - Wendy - said I looked uncomfortable. And she was right.

Because let me tell you the real story. I am shy.

When my brother and I were kids, my dad was constantly trying to force me to talk to strangers. I know, I know. But he'd come up with things for me to ask the hotel desk or whoever, because I know my shyness annoyed him. And my brother, three-and-a-half years younger, would do it for me. Because he liked talking to strangers. He still does.

Did you know this? Sometimes people do not believe me. Sometimes people tell me I'm not shy, which is kind of annoying, because it's not like it's I'm asserting that I'm royalty or a member of Mensa, in which case you would be totally free to be all, "Prove it, lady!"

I am neither, FYI.

But I am shy. And an introvert. They are not the same, although people sometimes conflate them.

When I look at this picture, I recall how I felt. So nervous. So awkward. Standing on the edge, afraid nobody would talk to me.

I mean, the grown-ups talked to me. Old family friends.

But my brother and his wife's friends were very tight. And mostly coupled. The people around our age all knew each other, and most of them did not know me. Not that they weren't friendly. They were more just having an awesome time hanging out with their friends.

Now, as the night went on I felt more and more at ease and wound up having a tremendous time. Ultimately, the guys talked to me, my brother's high school buddies, some of whom I'd known since they were 14, but didn't really know.

The night wound up being so much fun. But not for me during the time of this photo.

Shy is hard. Not just because, duh. But shy is mistaken for so many things. Bitchy. Haughty. Arrogant. Uninterested. Snobbish.

For a long time I envied my friends who smoked, because you could stand alone and still have something to do. Or you could bum a light from someone, start a conversation. They never seemed ill at ease.

And yet, I never wanted to smoke. I just wanted something to do with my hands that wasn't like crocheting or nose-picking or something.

I spent years on the edge of social situations, peering in, yet feeling like I was outside, terrified that nobody would talk to me. That I looked ridiculous, just standing there.

And yet in all that, I gallivanted off to foreign countries, sometimes without actually having a handle on where I was staying or the currency. I've traveled alone a good deal, and was almost never alone because I met so many people.

And I loved dating. Loved loved loved. I mean, except for the terrible dates and then when I'd been doing it for so long that the hopefulness had gotten squashed out of me. But for the most part, I loved the rush of the possibility, the excitement of uncertainty.

That is, in fact, the only thing I miss about dating. I like the stability of marriage, but I miss the sparkle and mystery of newness. But this is a tangent.

And it is true that sometimes I just blurt weird shit out in public. It's also true that when I'm comfortable in a group, I'm the one most likely naked or hanging from the chandelier. With or without alcohol.

This is figurative, of course. I've never actually swung from a chandelier.

Now, as an adult in my 40s and as a mama, I am: 1. almost never alone, and 2. fully aware that other people are not wasting their time looking over at me thinking I look dumb not talking to anyone.
But in this photo, oh, I am afraid; I am shy.
Posted by Lemon Gloria on Friday, August 01, 2014