And we'd better not ask him if he wants to go back to the marsh, because he will say NO 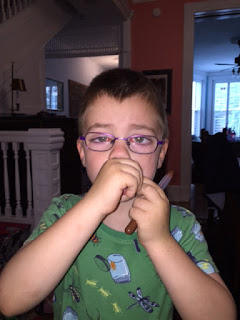 Jordan came home from surgery late Tuesday afternoon. He threw up, took off all his clothes, and crawled in bed.

So clearly ready for freshman year of college.

The doctor wound up operating on both eyes (with Nick's consent). Apparently when he put Jordan under, both eyes turned straight inward, indicating tight muscles in both. So my poor boy came home with two very red eyes.

We had to take a picture to send to the doctor on Friday to show how Jordan was progressing. You can see the red eyes if you embiggen. And you can't tell by this photo, but by this point he was actually doing quite well.

I kept him home from school all week. We had a very lot of Mama-Jordan time.

By the end of the week his doctor said he could go back to school. I said I thought he wasn't supposed to roughhouse for a week (I read the instructions! I am a first-born rule follower!) and he said, "Is he at a rough school? He just needs to make sure he doesn't get an elbow or a bump to the eye."

And I was all, does he know how often this kid face plants? A month ago he skinned his nose--the front and sides--really badly, because he was pushing a small toy truck and it got out of control. His glasses are severely scratched.

Have you ever skinned your nose like that? Me neither. And I trip a lot.

I just said I'd feel better with him home till the following week. I had no faith that he wouldn't somehow mash at least one eye. Or he'd be on the jungle gym and plow his face into some kid's shoe. He does this kind of thing.

Plus what was he going to miss in four days of Kindergarten? The "th" sound?

He couldn't go swimming or to splash parks, and it was hot. Bright sunlight hurt his eyes and made him cry. I was worried about him getting sand in his eye in the sandbox, which happens on the regular.

(Me? Imagine the worst? Fret about everything? Me?)

So we stayed in a lot. This worked out, because on the whole he prefers not to leave the house.

We played a great deal of cards. He is the douchiest Old Maid player you've ever met. This is not new.

On Tuesday, while waiting hours in the hospital, Nick and Jordan discovered Angry Birds. I know, we're years behind the rest of you. We all now find it very compelling. So there was a lot of Angry Bird playing as well.

On Friday Betty and I took him to the 3D dinosaur IMAX at Natural History. We took the bus downtown! We bought popcorn! We put on 3D glasses! We at at Shake Shack!

He thought the movie was the greatest thing he'd ever seen. He kept reaching his little hand forward to try to touch them, and saying, "I'm so GLAD you brought me to see this!"

We learned that the largest dinosaur was 110 feet long and weight about 100 tons, which is something I cannot wrap my little brain around. Also that Indiana Jones was based on Roy Chapman Andrews, the first Natural History scientist to head to Mongolia to find dinosaur bones. And finally, 3D makes me dizzy.

It was really cool.

On Saturday there was a school carnival we'd been planning to go to...but then I realized that he couldn't jump in the moonbounce. You can't take a kid to a carnival and be all, sorry, you can't do your favorite thing. And no, you can't play on the playground equipment either.

And stay away from kids with elbows!

So we took the kids to a marsh. (No climbing, no kids.)

It was beautiful. And hot as balls. Hotter, really, at 91 degrees. And there was a lot of walking on a path to get to the end to look out at the marsh. We took little detours on small beaches and found shells and dragged pieces of wood.

But mainly we walked a lot.

I'm not famous for seeking out the nature, except that one time that I trekked for a month in Nepal, which Nick always likes to bring up when I am not so enthused about the out-of-doors. And so, when the kids were complaining, I said, "It really is a lot of walking to get there."

Nick said, "Right, because it would be so much better if you could just drive up to it and then you're  there."

Jordan and I both said, "Yes!"

Nick said, "I think that the walking and enjoying nature is the point."

I had to carry India most of the way out, and cajole Jordan, who insisted on carrying a branch almost his size, which really hampered his progress, the bulk of the way.

We lured them with ice cream and air conditioning.

On the way home, Jordan declared the marsh the worst place he'd ever been. He is never, ever going back to a marsh for as long as he lives. Ever.


We had pizza and movie night. We watched Star Wars.

Obi-Wan Kenobi wasn't our only hope, but he sure made things better.
Posted by Lemon Gloria on Tuesday, June 02, 2015