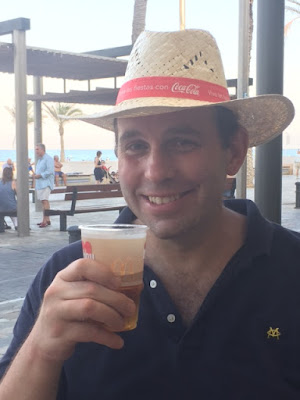 OK, so you know how we went to Spain and it was the hottest hot on Spanish record of hotness ever and we had no AC and I sat around in my underwear drinking wine and swearing?

Yes. Well, we also went to the beach every day.

So this apartment had clearly been a beach rental for a long time. As such, the closet held an impressive accumulation of water guns, pool floaties, beach umbrellas, and the like.

Now, it has been years, and decades, even, since I baked in the sun. I regret my years of sunbathing in the tropics. I wear zinc sunscreen and long-sleeved UPF shirts and hats and such. I foist these items on my children.

So when I saw the silver beach mat, I thought, really? Does anyone still actually tan themselves with silver around them to amplify the rays? Yikes!

I opened it and it was clearly a Coca-cola giveaway. We'd been given a cute free hat at the grocery story with a Coca-cola band, so clearly they had a lot of promos. But still. This was surprising.

Then later we went down to the beach and I saw a couple people rolling out mats, and the back side of them was metallic.

Oh! They're to keep the sand out! So smart! We put the silver side down and put a towel on the other side! Yes!

Because that fine white Mediterranean sand gets in everywhere. We'd put our towels down and no amount of shaking could get it out. I am still finding grains of sand in bathing suits that I've washed and washed.

So the next day as I was accumulating stuff to head down to the beach, I added it to my armload.

Nick had gone down first to set up the umbrella.

The kids and I walked up to him and I dropped my bag and started opening my handy-dandy super-smart beach mat.

And Nick said, "What are you going to do with that?"

"Yes, Nick. You put the silver side down so you're not getting the reflected rays. (Like I don't know anything.)"

"You don't think it's a car windshield shade?"

Yah. So he folded it open. And said, "See? This part that dips down is where your rear view mirror fits."

And then he fell on the sand and rolled around, he was laughing so hard.

And then guess what I got as a birthday present? Yes. 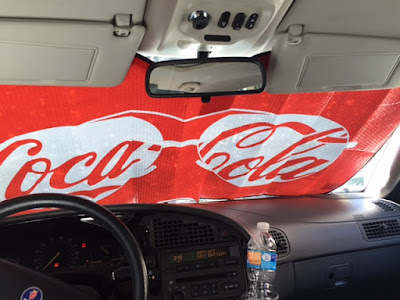