Past the scientific darkness, past the fireflies that float 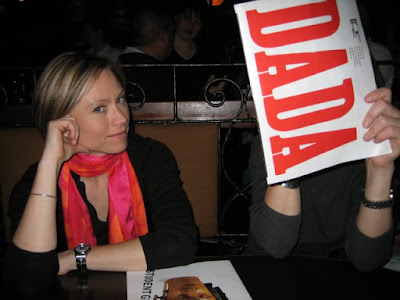 If you could go back in time and tell your younger self anything, what would it be?

Sometimes, when I'm driving on a highway at night, I feel so peaceful. I turn off the music and it seems like the entire world is wide open, the possibilities are endless, and I could just go on forever.

And then, then I get to a more rural area with no street lights and lots of trees and I check my gas gauge nervously all I can think about is that lunatic axe murderer loose in the woods and how I cannot wait to arrive at my well-lit destination.

What I'm saying is, I drove to New Jersey Friday evening.

Due to necessity, I started out at rush hour, and as such it took me eleventy kabillion hours to get there. However. I was alone. So they were pretty peaceful hours, no matter what was going on on 95.

Nobody was screaming "FROZEN!" "NO FROZEN! Taylor Swift!" "SNACKS! WE NEED SNACKS!" or picking at the other person in the back seat. Nobody was in the passenger seat to criticize my choice of 80s Italian pop music.

The car that I inherited from Nick's dad—our "new" car—has a tape deck. I played a recently-unearthed mix tape made by a long-ago boyfriend, and thought about who I was at the age of 22.

I drove up for a weekend with two of my dearest friends. These are women with whom I spent so much time eleven, ten, nine years ago.

We lived near enough to run over at a moment's notice, and knew what was going on with one another each and every day. They were my closest heart people, the ones who listened to my dating dramas, and who gently offered hope and wine and solace, and who were surely relieved when I started this blog and had somewhere else to direct my angst.

We no longer live near each other, and as such, don't get together as much as we'd like. But heart people stay, and sometimes you are shocked by how well you know each other.

You remember the when of the when and maybe even what they were wearing that one time that particular thing happened.

And so, when I mentioned the exhaustion of motherhood and the tedium of marriage, and how I think it's just an inevitable by-product of stability and continuity, I laughed after one of them said, "Listen to yourself. Wouldn't you love to be able to reassure 10-years-ago Lisa that she was going to get married and have kids?"

In fact, I would love to reassure so many ages of Lisa that things would be OK.

To teenage Lisa, I would say: You are smart, and you have good ideas, and you should listen to your heart and mind rather than doing what authority figures tell you to do. Also, eat protein. Seriously.

To college Lisa: You weren't raised to think this, but happiness is an important goal. You're miserable. Drop out and do something else until you can figure out what path you'd like to be on.

To 30-year-old Lisa: Find a therapist. You don't think you need one, but oh, you do. It'll make you feel better.

To 35-year-old Lisa: Don't let guys' opinions of you dictate how you feel about yourself. They've got their own problems; your problem is you pick them. The right person is going to love you for you. And your therapist is right; you really will get married.

And PS at any age: Marriage isn't going to make you happy. You have to figure that shit out for yourself.
Posted by Lemon Gloria on Tuesday, October 27, 2015