And after all the violence and double talk, there's just a song in all the trouble and the strife. You do the walk, you do the walk of life...

You guys. My NYC Out of the Darkness Overnight walk was extraordinary. And fun. So very fun.

Mentioning fun along with suicide likely makes you question my definition of fun. Or my sanity.

The back of the Overnight shirt says, "I'll be up all night for..." and then there's space. People put pictures or names. I have three. I saw a woman whose shirt listed her sister, brother, sister-in-law,  brother-in-law, and multiple others.

The people who walk have lived through pain.

And there is comfort, there is freedom, there is joy in walking with others who know from whence you come. Who know where you live.

I was going to walk alone, which wasn't my preference, but was just how things shook out. And then my friend Rob, who lives outside Toronto, said he was considering driving down to NY to walk with me.

He almost brought his hatchet. This here hatchet:
He started out and then realized he had recycling in the back. So he returned home to clear it out, and  noticed his brand new hatchet. I don't know if border police care if you have a hatchet, even a new one without blood and other axe-murdery evidence, but I'm going to imagine yes?

Rob was the perfect walk companion. I had such a great time. I am so tremendously grateful to him for walking with me.

And good, good things happened on this journey.

I got to meet a lovely woman named Tiffany, a long-time reader who lost her grandfather to suicide. She was walking with a team, but we met before and after. And hugged. But forgot to take a picture! Maybe next year!

My high school friend Seana, who lives in Brooklyn, joined us for dinner. 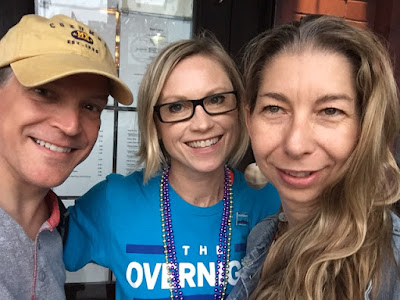 And then, just as the walk began, it started POURING. People slogged ahead. In fact, almost everyone. I insisted on standing under a large overpass, and Rob, a hardy Canadian undaunted by rain, indulged me. I loathe precipitation. I take it personally.
I checked the weather every 30 seconds and we only had 30ish minutes to wait until the rain was supposed to clear. I knew we could walk fast enough to catch up at a rest stop.

As we walked, having lost everyone, we started wondering about the route. And then we spotted a fast-walking woman who looked like she knew where she was going. We followed her.

So as not to freak her out, after a couple blocks I said, "We're following you. You look like you know where you're going."

She was from NYC. She was fabulous. Sharp, gorgeous, and hilarious. She has twice my energy and talks to everyone.

She was walking alone until we joined her. And after the first mile or so she said, "A friend of mine owns a restaurant a couple blocks off the route. He contributed to my walk. We could stop in and say hi and get a drink!"

Rob and I looked at each other, said, "Why not?" and off we went.

They hugged her and gave us the largest and possibly tastiest meatball and sauce. And bread and salad and sangria. 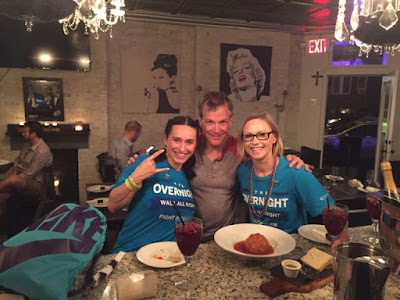 Our new friend, she basically knows everyone. And anyone she doesn't know yet, she will in like 30 seconds. Truly, I've never met anyone like her.

We stopped into this bar for a drink. And that one just to say hi. The walk took us over the Brooklyn Bridge about 11 pm.
Halfway over the bridge we stopped to take a picture and when we turned around, she was talking to other people, trying to figure out where the next snack stop was. And we were like, "Don't think you're making new friends. Even if they know where the snacks are."

Once in Brooklyn, we picked up her boyfriend, a police chief, who was just getting off work. He joined us for the remainder of the walk.

We stopped in to some bar to say hi to Lee--the man with his tongue out. 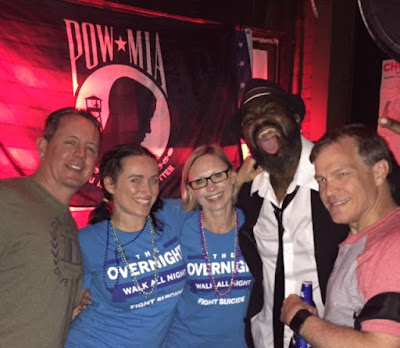 We went to this place called Lucy's because it wasn't that far off the route, and they know the 85-year-old Polish woman who has opened and closed the place for decades. Who gave us shots of some kind of Polish liquor.

Somewhere around 2:30 am she said, "Do you like rice pudding? Because I know a place..."

We had rice pudding from a take-out window.

This was a night of embracing the YES.

Admittedly, I'd never been to so many bars dressed in neon pink workout tights and a suicide prevention T-shirt and beads and a backpack. Or any, really.

But there we were.

Somewhere near the end of the route, we encountered half of the Village People (see above).

I just wanted their picture, but they insisted I get on in.

This was my third Overnight, and I will admit to you that the lead-up takes a toll. I hear stories of loved ones lost. I think of my own.

I cry. I carry stress.

The week before the walk, I had what felt like a shard of metal stuck in my upper back. Ibuprofen helped, but not enough. By the time I was driving to NJ on Friday, I had to turn my whole body to look over my shoulder. I was worried about the walk.

It was still there Saturday morning, but sometime after Rob met me at Penn station, it began to dissipate. By nightfall, it was gone entirely.

The walk is something I have to do. I'm going to write another post on the why, because it would make this post too long. But it fills multiple needs.

Thanks to the generosity of friends, loved ones, and even complete strangers, I managed to contribute $5,507 to the American Foundation for Suicide Prevention.

I feel so pleased and proud.

It was a night of adventure. Of randomness. Of many unexpected stops in many places, and then hurrying to make up lost time. Of snacks, good lord, the endless snacks. Of hugging strangers. Making friends. Laughing. Shedding tears.

The Overnight is an event like no other I've been to. It is weird and amazing to walk through the night. I hope you never have reason to do it. But if you should find that you do, I cannot recommend it more strongly.

I set out alone for NYC with trepidation. I was looking forward to spending time with Rob. I was nervous about the walk and the city.

It couldn't have been more wonderful. I mean, maybe it could have, like if I got to meet Jamie in person and he was wearing his kilt and whispering sweet nothings in Gaelic or something.

But in the real world, it couldn't.

Sometimes the stars align, and you do something you feel good about, and in the process you spend time with an old friend, make some new ones, and meet some Village People who are hanging out on the stoop.

It's good to be reminded that sometimes, the stars all line up, and life is like that. 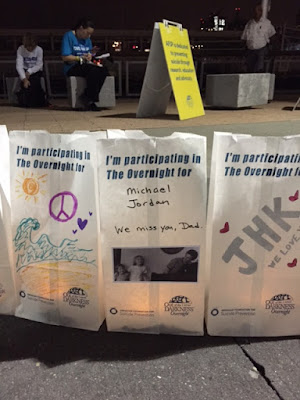