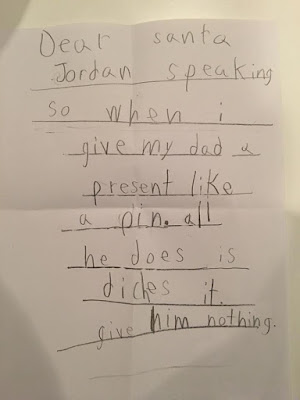 Last weekend Jordan asked how he might send a letter to Santa.

He and India had already sat on Santa's lap and given him their Christmas lists. But I figured he had something he wanted to add.

The kids often give us things they come across as presents. And just prior to his letter, he'd apparently given Nick a pin. Nick had thanked him and then set it aside and gone about with whatever it was he was in the middle of doing.

So Jordan wrote his letter and put it in an envelope, and we helped him address it to the North Pole. We explained how he had to put our return address so Santa would know where exactly this was coming from.

That night, Jordan said, "Daddy, you know my Santa letter?"

"Can you please throw it away? I don't want to send it."

There you have it.

We really don't want to get on his bad side.
Posted by Lemon Gloria on Thursday, December 22, 2016