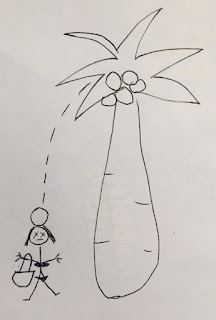 Death by coconut
This is a thing. A friend of mine went to Panama, and at the hotel they gave her a list of things to watch out for.

Top of the list? Above scorpions? Falling coconuts. Hand to god.

"Although it sounds peculiar, the most dangerous thing in the Caribbean is having a coconut fall on your head." Direct quote. See below.
So I Googled this, and there are a number of articles about how you are more likely to die from a falling coconut than a shark attack.

I think they were trying to reassure people, like listen, shark attacks aren't even as common as coconut attacks, but all I could think was, you're not safe in the water and you're not safe on the beach! Nature will kill you every time.

Listen to this: if a coconut falls out of a tree, it can hit you with 2,000 pounds of force. And then you die.

I recommend wearing a sturdy but stylish pith helmet. Betty used to have a very cute one, although I cannot remember why, because if she knew about the coconut danger, she never shared it with us. 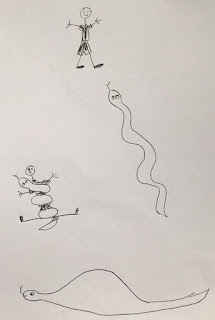 Death by being swallowed by a python
Last week I read about a 25-year-old Indonesian man who went out to harvest palm oil. And he never came home, so his family went out looking for him.

Do you know where they found him, two days later? In the stomach of a 23-foot long python.

Pythons, they squeeze you to death. They're incredibly powerful, and they just crush the stuffing out of you. There you are, walking along, collecting your palm oil, and the next thing you know your whole body is being strangulated by a giant python.

Then they swallow you whole. Their jaws unhinge, or something like that, so they can open wide enough to swallow an entire grown man. With his boots on.

They do this, and then lie around in a ditch and wait for you to digest.

I'm not clear on what happens to the boots.

Also, I know what you're going to say: We don't have them in DC, Lisa, except in the form of shoes and handbags.

Listen, we also don't have hippos, and they are way high up on the list. I don't let little things like practicality or lack of proximity deter me.

Like, I also realize there's not going to be a shark in the bottom of the pond or the swimming pool. But if I can't see the bottom, or if it is deep and I am swimming alone, it doesn't keep me from panicking.

Jaws traumatized me for life.

Also, did I tell you that there are sharks in the Potomac?