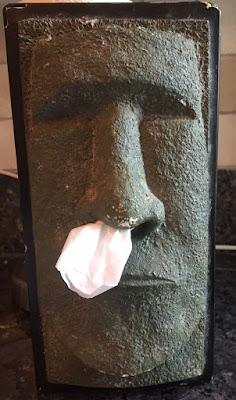 Some of you are in-person friends of mine, and the truth is, I've been instructed not to point this out. I risk letting you in on a little secret.

But I've decided it's a risk I'm willing to take. Because I love you all so much, and this just needs to be out in the world.

You know that game where you each get a number and you get to pick a present out of a pile, and then you steal from each other, and the person with the highest number gets the best choice?

That game stressed me out until I realized that honestly, there's nothing I need. If you put something hilarious or nice it with the thought that you're giving it away, and you're interested to see where it goes, but you're not overly invested in getting something, the game is way more fun. For me, anyway.

Nick's office plays this game every year at their holiday party. It's where he got the fuzzy blue bodysuit.

We used to spend Christmas Eve at Pat and Phil's house, and we always played this game.

One year, this tissue dispenser was the most hotly contested item. It was stolen and restolen. My dad coveted it. I coveted it. Everyone but Betty wanted it.

Our friend Byron wound up with it.


I thought of it off and on over the years. I googled it a couple times, to no avail.

But life goes on. You cannot stay hung up on a tissue holder forever.

A few weeks ago, we attended Pat's memorial service.

I have to tell you one woo woo thing that happened, because Pat was my woo woo person. Nick and I drove separately, and after I parked my car, I checked my phone for the time.

Facebook was open. And the message on my page was one of those friendship reminders with a whole bunch of photos. It said that Pat and I had been friends for 8 years.

Naturally, this meant I cried all the way down the block and into the church. One of the ushers asked if I was OK.

I like to think I could be a spy but man, I can't even play poker.

The service was beautiful and funny and sad. The music was gorgeous. The speeches were intensely personal.

I cried a lot. I wore a dress with pockets that turned out to be perfect.

Why don't all dresses have pockets?

And then afterwards, Byron approached me. We hugged, and he handed me a bag and a note. The bag contained the coveted object, which he was giving to me.

He wrote that he remembered that my dad had coveted it, and he was now ready to pass it on to the daughter of the original coveter. It was a double, even triple gift, in this way.

He suggested putting it in a bathroom used by guests. The reward, he says, will be a loud laugh.

It's not yet been put on full display, in that I have to figure out how to mount it on the wall. It's currently on the counter, and too subtle. I need Nick to help me with this.

I'm not saying it's a perfect test. I'm also not saying I'll be loitering outside the bathroom door.

It is allergy season, however.