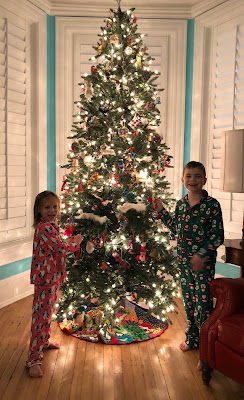 Eight years ago, my big boy was a small baby. I had just returned to work from maternity leave. And I had just started treatment for postpartum depression.

Our house had mostly new electric wiring by that point, I think. It didn't yet have all new pipes, and it certainly didn't have a new boiler to power the radiators; I know this because because the old one died for good a month later on the first day of Snowmageddon.

I think we got the new windows, the ones that the wind didn't whip through, in January or February. I can't remember anymore.

But at this point, Christmas was upon us.

Our ground floor was still under construction, but our kitchen was nearly complete, in that we had a functional sink and stove and counters. But the rest of the floor was ripped up, dusty, unusable. We were still walking on planks to get from front door to back.

The outer front doors were still missing, and the inner door had a good inch of air at the top and bottom. The basement door had a big piece of plywood as one corner, and I still feel lucky that noone broke in that way.

At that point, our alley was sketchy, and humans used to use our garage as a private bathroom.

So at this juncture in our lives, heading toward my first Christmas without my dad, the Christmas of the most painful, hardest, worst year of my entire life, Nick and I discussed a tree.

I say "discussed" when I actually mean "fought about". Just like we fought about where to put the washer and dryer, and numerous other things, when really each fight was a vehicle for screaming out pain and grief.

Christmas was fast approaching, and we weren't going to go to my parents' house to celebrate, because Dad had walked out the door one beautiful day that May and never returned, except as ashes, and Betty was at our house most of the time.

Nick wanted a fake one and I railed against the fakeness of fake. Even in Bangladesh, when we'd tied two sort-of-Christmasish trees together to make a Christmas tree, we'd had a real one. No way no how did I want a fake tree.

In this period where he was working 12 hours a day and I was hanging on so barely by my fingernails, where it was all I could do to make sure I had all of my clothes on before heading to work, where I still cried every day, I knew that I could not add a tree to my list.

I don't, in fact, remember my exact wording. But I know I have the tone just right.

So Nick went to Home Depot and there were two trees left, both on sale. He brought one home and lugged it up to the third floor and took it out of the box.

It had lights. Already strung on it. It was big. It held all our ornaments. It was pretty.

It was perfect. I loved it.

Eight years later, we still have the same tree. It's still very pretty, and we get compliments. And every year I say, "Thank you! You'll see this exact same tree next year. With the same ornaments."

It lives in a box under the stairs, and the weekend after Thanksgiving, Nick pulls it out and assembles it, and Betty, the kids and I decorate with the same ornaments we've had my entire life. Plus a new one or two every year.

I still love it.

This year, a string of lights went out. Nick bought a gadget to find the problem lights. He fixed a number of them. (This love of tools and gadgets, and his propensity to fix things, are aspects of this man I absolutely love.)

And then two strings went out. Our tree is still perfect, just with a band or so of no-lights.

He said with all missing lights, next year it might be time to replace the tree. I suggested just buying lights.

Why add a great tree to landfill, when we can add lights? I vote for bulbous, milky, colored lights, just like my childhood. Those are my favorite kind.

Our tree is still lovely, just aging. It mostly works, just with a couple places that need some help. This all feels very familiar.

It's not what I'd have chosen eight years ago, when I didn't actually have the energy to chose anything.

But I don't get itchy welts on my arms while hanging ornaments, there are no needles to vacuum, and we can have the lights on as much as we want without worrying about fire.

This is the tree my kids have grown up with, and could well be the tree we still have when they head off to college.