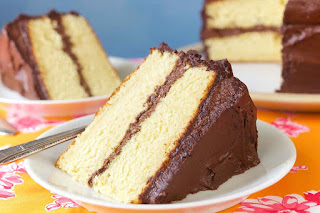 Oh, hey! This is a really good cake. I found it on King Arthur Flour's site last year. This is also their photo.

When I made it I followed the instructions exactly, and it was delicious.

It's Nick's birthday on Monday, so I asked him what kind of cake he'd like (and suggested this).

India said "I'd like vanilla, but cupcakes, and not that frosting you made last time. Actually, no frosting. Just vanilla cupcakes."

I told her it wasn't her birthday and we should try to make Daddy happy. And she said, "OK. Just vanilla cupcakes."

Personally, I view cake as a vehicle for frosting, but I'm also picky about frosting. I have two I like. One is my grandmother's huge, fluffy beaten egg white frosting, and the other is cream cheese.

But again, it's Nick's birthday, so he gets to pick. Or maybe India does.

Or maybe I make this cake with whatever icing Nick wants. And what's the difference between icing and frosting? I use these words interchangeably. Like car-mul or cara-mel, in my mind. And perhaps I will also make cupcakes with no frosting.

And then I will be very tired and sit in the corner eating a bowl of cream cheese frosting with a spoon.

Except that I basically gave up sugar in January so maybe I won't.

Anyway, I hate the endless anecdotes on food blogs when all you want is the damn recipe. But then again, I'm not a food blogger.

But if you're here for cake, here's the cake.

Preheat the oven to 350°F. Lightly grease (but don't flour) the bottom only of your choice of pan(s): one 9" x 13" pan, two 9" round cake pans, three 8" round pans, or the wells of two muffin tins (24 muffin cups). You can also line the muffin tins with papers, and spray the insides of the papers.

In a large mixing bowl, whisk together the sugar, flour, baking powder, and salt.


Add the butter and beat with an electric mixer at low speed, until the mixture looks sandy.
Combine the milk and vanilla and add, all at once. Mix at low speed for 30 seconds, then increase the speed to medium and beat for 30 seconds.

Scrape the bottom and sides of the mixing bowl.

With the mixer running at low speed, add 1 egg. Increase the speed to medium and beat for 30 seconds.

Repeat this procedure with the second egg. Continue adding the eggs, scraping after each addition, until all 4 are added. After the last egg is added, scrape the bowl once more, then beat at medium-high speed for 30 more seconds.

Transfer the batter to the pans of your choice.

For layers, divide the batter among the pans. The batter weighs 48 ounces; if you're using a scale to measure out your layers, each 9" layer should weigh 24 ounces; each 8" layer needs 16 ounces of batter. Smooth out the tops with an offset spatula or the back of a tablespoon.

The cake is done when it's golden brown around the edges and just beginning to pull away from the edge of the pan. A toothpick inserted in the center will come out clean.

Remove the cake from the oven and allow it to cool for 5 minutes, then turn it out onto a rack to cool completely.
Posted by Lemon Gloria on Friday, March 09, 2018