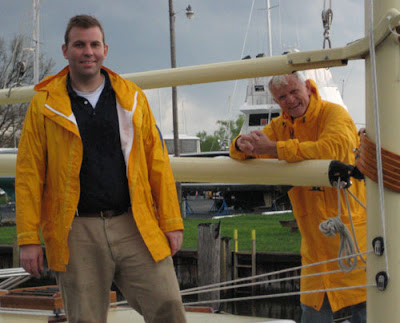 This was one of the stories I told at my dad's memorial service.

Several months before Nick and I met, he bought a sailboat across the bay. A 25-year old sailboat. With a a 25-year old engine, old sail, old radio, old navigation system.

Over the winter, he had a lot of work done on the boat, and he did a lot of work himself. But he was tired of constantly driving over to the Eastern Shore, and he was itching to get his boat in the water. And so finally, in the spring, all the body work had been done, and the boatyard needed the space, and he'd gotten a slip on this side of the bay. So he needed to bring it across.

Now, it didn't have a sail, because the old one was too damaged, and the new one wasn't ready. So he asked my dad if he'd motor the boat - with the old old, one-cylinder engine - across the bay with him.

The deadline was coming up on moving the boat, and the weekend they had to do it was a really cold, crummy one. It was grey and rainy and horrible. But they had to move it.

So my mom and I drove them to the Eastern Shore, dropped them off at the boat, and then we went outlet shopping. For hours. We took our time getting back to this side.

And finally, they arrived.

Nick's hair was standing up. He looked completely frazzled. My dad was beaming. You can see Nick's forced smile in the photo, and the huge difference in their demeanors.

You see, it started out OK.

And then they got halfway across the bay. To the point where the water is deep enough for the really big boats. I think it's called the shipping channel.

So in the rain and fog, they got to the point where they were in the path of the big boats. And then the engine started smoking. Like, really smoking, in a kind of alarming way.

The problem was, with no sail, the engine, the old putt-putt engine, was all they had to get across.

And at this point, they realized that the radio had stopped working. As had the navigation system.

And Nick became more concerned. And my dad said, "Oh, we'll be fine."

So Nick handed him the map, and said, "OK, Mike, this is the marina we're headed for. And there's a radio tower next to it. Do you think that's that radio tower?"

My dad looked at the map, looked up, shrugged, and said, "Yeah, sure. It could be."

"Mike! You're the one who was the navigator in the Air Force!"

My dad took another look at the map, turned to Nick, and said, "You know, aerial maps look a whole lot different from nautical maps."

They arrived, as I said, with Nick looking all frazzled, and my dad in great spirits.

Nick's reply was that it was a challenge. He needed a drink. My dad said it was terrific.

I will say that when he wasn't the cause of it, my dad was amazing in a crisis.
Posted by Lemon Gloria on Tuesday, June 09, 2009