The one for the strong of stomach 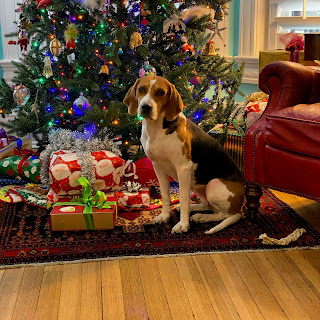 This is a rather revolting tale, so if you don't like reading gross stuff, stop now.

If, on the other hand, you enjoy schadenfreude, scatology and/or emetology, then do I have a gift for you!

You've been warned. On with the story.

The other morning I walked into the kitchen to find Nick shaking his head and scrubbing his hands with scalding water.

He said, "That dog is so disgusting."

Wanda, our scroungy hound, will lunge for any old rotting piece of pizza, tail of shrimp, or whatever else she may find in the park. Regardless of how well fed she is here.

She just can't resist the crust of an old bagel. She will not drop it on command.

Nick or I can generally pry her mouth open and pull out whatever it is. One night she got something she really wanted and absolutely refused to open her jaws. So Nick held her head and I put my fingers over her nose until she had to open her mouth to breathe.

Yah, so on this particular morning, she stuck her head into a bush and pulled her head out chomping something. Nick prised her mouth open to remove...poo.

That dog was eating poo.

Which he was vigorously scrubbing off his hands on that fateful morning.

And then he left for work.

Jordan went upstairs to get online for school, and India headed to the living room to open her books while I made tea.

I started running towards her.

On the whole, I'm terrible with vomit, but dog vomit, I've learned, tends to not be so bad, because it's mainly a big blob of dog kibble. It's pale, easy to clean up, and doesn't soak into the rug.

Unless your fucking dog has eaten poo.

I grabbed some paper towels and headed into the living room to find that Wanda had puked on my favorite carpet. One my parents bought in Tehran in 1979 while my brother and I climbed on piles of carpets as tall as mountains to us.

We spent the day in a carpet store, eating biscuits and drinking tea while our parents perused carpets and bargained.

I approached the vomit to find that it was larger and more spread out than normal.

And. It smelled really, really bad.

For this I would need gloves. And way more paper towels. I ran to the kitchen and returned with such items.

I started working on the mess and immediately began retching. I got up, and, realizing I wouldn't make it to the bathroom, headed for the front door.

Yes. There I was, running for the door trying to hold in my vomit, clutching paper towels soaked in semi-digested, regurgitated poo.

I didn't make it.

However, I did manage to mainly vomit into my hands.

When India realized what was happening, she began to retch.

I yelled, "TAKE WANDA OUTSIDE!" Figuring that if there was any more puking done by anyone, at least it would be outside.

Then I yelled a bunch of profanity just to make myself feel better.

Jordan came running down the stairs to see what the commotion was.

He, too, is a sympathy puker, and I was not about to add him to the mix. So I told him Wanda had puked, it was terrible, we were fine, and to go back upstairs.

Then I cleaned up my vomit and went back to work on the rug.

Some people, maybe most people, might be more concerned about the state of their dog than their rug. But I was mad. Ooh, I was so mad.

If you're going to be an asshole and eat poo, you'd better not puke on my carpet.

I was blotting and wiping with wet paper towels, and then I recalled that soda water takes stains out. I looked, but we didn't have any.

We did, however, have white wine, and I remembered reading that white wine will take red wine out of a carpet.

So I poured a bunch of white wine on the stain.

And it was only 9:45 in the morning, but I also remembered that 7:30 am is 5:00 pm in New Delhi, so that would make it whatever time of the evening there.

I poured myself a big damn glass.

Then I let the dog back in.