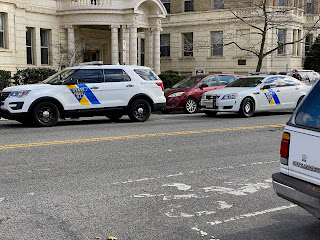 Let me start by saying that I am so thankful that my mom got her first Covid vaccine. Truly thankful.

Perhaps more so because it almost didn't happen.

And I'm grateful that it was last week because getting across DC would be a nightmare this week.

Let me add that I'd like to know why NJ State Police cars are parked around the corner from us.

I thought we were about a half a mile north of the designated Green Zone.

And is it so crazy that we have red and green zones  and police and National Guard in DC right now because our politicians need to be protected from armed Americans?

I mean, we see a lot of police in DC. And we hear a lot of helicopters. But not like this.

A few months ago, the kids and I were out walking when a police car sped around the corner.

So now that's what we say when we see them. We do our best.

But back to Betty.

I don't know if it's improved since last Monday, but the DC scheduling website was kind of horrendous. You had to enter all your data and fill in those annoying letters and numbers in Captcha twice before it would tell you that the location you selected didn't have any vaccine.

While I was on the site, I was number 125 on phone hold to speak to someone.

Finally I found a clinic in NE that had appointments available. I snagged one for last Wednesday.

As we drove across town Wednesday, there were lots of police cars and people putting up fencing and placing jersey walls.

I've only seen photos of the security downtown, but Nick goes to his office every day. He can't drive or take the bus because of all the roads blocked off. So he bikes.

I asked him to please wear flannel plaid so he kind of blends more.

We live north of the blocked-off area so up to now we haven't seen a big police presence in our neighborhood, but it's very disconcerting.

I am nervous about this week, particularly, of course, Wednesday.

And speaking of, I got a kick ass dress that I am going to wear Inauguration Day. It has 10 swords on it, and lots of eyes. Very powerful. I'm excited.

Anyway, for the shot we drove across town, which gives me anxiety, because driving places I don't know makes me anxious.

Which may sound odd, because I'm always proposing we jump in the car and drive somewhere like Colorado. But it's more cities that make me anxious. Highways are fine.

In fact, I got my first in-person speeding ticket on a highway in Indiana last summer. The officer clocked me going well above speed limit.

Fortunately, I'd slowed down before going by him. I'd been going rather fast.

Which reminds me. Nick handed me a photo ticket the other day. He was all prepared to lecture me. I could tell. He that look. He had a tone.

He was starting to talk about responsibility and being careful, when I looked at the date and the location of the ticket.

I was all, "Wait, when was I in that neighborhood? What date?"

So I suggested that perhaps he should be more responsible and pay more attention.

I will admit to feeling a little smug at that point.

But finally, back to Covid.

I got Betty this precious, hard-to-get appointment all the way across town. Nick printed out the confirmation, and she had her license and insurance.

I'd registered her with her name, her birth date, and our address. I gave my email and phone number so we couldn't miss the confirmation.

We left with plenty of time. We got there a few minutes early.

India and I waited in the car. We'd each brought a book, and were settled in reading. And after about 10 minutes, my mom came out.

I asked how it was and she said they wouldn't give her the shot. Because the information was wrong.

She handed me the paper with the confirmation code to scan and said they wouldn't give her the shot. Because the email was in my name. They told her she didn't have an appointment.

When I knew for a fucking fact that she did. I was all, "Like hell you don't have an appointment. They're not giving you that shot!"

I threw on my mask and marched into the clinic with her close behind. I went up to the desk with the papers.

I very nicely but extremely firmly told the receptionist that they'd my mother out but she absolutely had an appointment. I said that it was under my email, but that's because she's 83 and doesn't email. I pointed out that the confirmation email was addressed to Betty. The name above the scanner code was Betty. They'd called me the night before asking for BETTY Jordan.

The woman took my mom's information and headed to the back.

A nurse came out to confirm the information. Then another one came out and said that the registration was under my name, but they'd switch it to Betty and give her the vaccine.

I didn't argue about the fact that they were mistaken and I had proof. I almost burst into tears, so relieved she'd be getting the shot.

I stayed inside until they called her back. I was super tense.

Honestly, I think that if an 83 year old person turns up in the correct time slot but there is some detail that is not correct, they should still give that person the shot.

The more people vaccinated, the better for everyone.

In fact, I think they should load up vaccines and medical personnel into ice cream trucks and drive through neighborhoods playing 40s and 50s-era music to entice senior citizens out and then just give them all the vaccine.

But that's just me.

Truly, my mom getting the vaccine is the best thing that's happened to me for as long as I can remember.

We return in February for her second dose.

What is happening with Covid shots (or police presence) where you live?