The window is open, so's that door/ I didn't know they did that anymore... 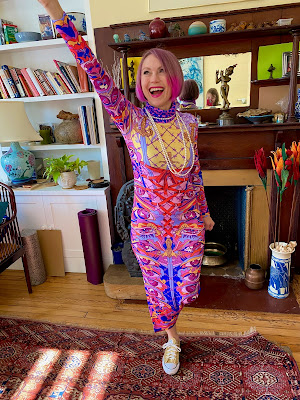 My mom and I are sitting in the living room drinking Prosecco.

I offered her a glass when she came downstairs around 1:00 pm.

The kids and I have been talking about a new president since, well, I guess since Trump won the election in 2016.

But we didn't then know we'd have added the joy of a biracial woman as vice president. A woman with an Indian mother!

When I decided to have a no-sugar January, and then decided to join Nick in dry January, one of my rules for myself was that January 20 could be a free-for-all. A big day of celebration with whatever.

I didn't join the kids in French toast dolloped with ice cream and berries. I meant to make a protein smoothie, but I needed to get dressed and put on makeup and walk the dog, and there was the inauguration to watch, and then India and I did a photoshoot in my new and fabulous Hypervigilance dress.

All this to say, I never did eat breakfast.

Proseccos is grapes, though. So I guess I had fruit for breakfast?

A couple weeks ago, I happened across this amazing and adorable possum design on Instagram.

I clicked on it, and it took me to the account of Jordan Pientadosi. Her words resonated with me and I  immediately wanted to buy one of pretty much everything on her site.

I believe in art, and supporting artists, and I also feel strongly in wearing clothing that brings me joy and/or makes me giggle.

So I ordered the Hypervigilance dress and as soon as it arrived, I put it on and decided I needed to wear it for the inauguration.

I mean, look! It has ten swords, including one on each arm! Powerful! It has so many eyes! 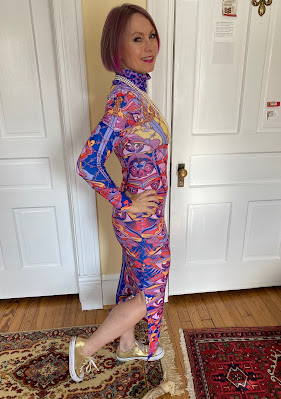 It is comfy for sitting around with the dog! 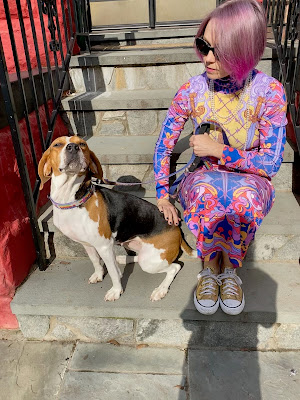 And! I seriously feel like I could kick someone's ass while wearing this if I needed to.

I felt like that was appropriate for the occasion.

I'm lounging around in it all day.

Naturally, for Kamala Harris, I added pearls and Chucks. The only Chuck Taylors I have are gold, but that seemed about right, too.

India is all about fashion.

She offered to take multiple photos of me. Since I don't often put on makeup and get dressed in real clothes anymore, and since this is a momentous occasion, I was delighted.

I maybe got her to take more photos than she was all that interested in taking. But I'm still delighted.

Betty thought the Prosecco was so tasty that she poured herself a second glass.

She just turned to me and said, "Is Prosecco alcoholic?"

I also believe in democracy.

I believe we have to pull ourselves back from toxic capitalism, where the wealthy just get wealthier by taking advantage of the poor.

I believe that people like Nick's older sister, who keep calling us "Socialists", don't actually know that schools and roads and anything that benefits people as a whole is a socialist construct.

I don't know if I believe, but I certainly hope, that intelligence will prevail. Intelligence and kindness.

After more than four years, I once again feel hope. Here I am, watching the inauguration intently. 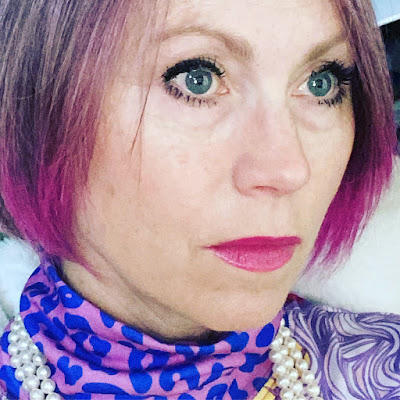 I believe that everything important comes back to love.