Half an alphabet and broken pants 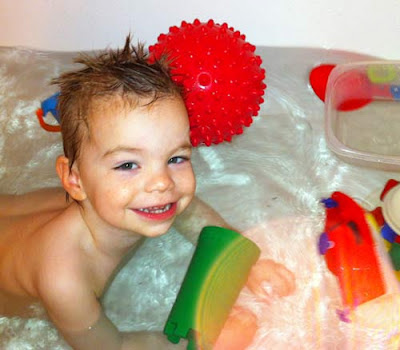 Currently the only functional tub in our house is up on the fourth floor.

Our eventual master bathroom has never worked, and Jordan's bathroom, which he and I share, is under construction. Betty has a great shower, but our son hates showers. Haaaates the water on his head.

So he and I trek up to the fourth floor to Nick's bathroom. Jordan finds it extremely exciting. "We're going to have a bath in Daddy's bathtub! Let's play with his toys!"

I took a cute video of Jordan bobbing around in the bath. He thought I was taking his picture, so he kept grinning for the camera saying, "Cheese!" over and over.

And then he sang the alphabet, ending with, "Cheese!"

A friend asked me if I was going to post it on my blog, and I said I wanted to, but then realized that his little butt was in the frame. "I am worried," I said, "about having it up on the internet for icky pedophiles."

"Are there any other kind of pedophiles?"

So I give you approximately half an alphabet, sung by the flying nun.

When I get Jordan out of the bath, I wrap him all up in a towel and cuddle him all swaddled and rock him and say, "Who's my baby?"

I didn't realize I always did this. But I do. Because now, when Nick is the one picking him up all snuggled in the towel, Jordan looks up at his dad and says, "Who's my baby?"

Nick and I were talking about how much fun the bath can be, and he said how sad he's going to be when Jordan gets too old to be bathed.

Then I was all, "You're probably going to be bigger than him for a long time. You might be able to force him to let you give him baths through at least junior high school."

Because that wouldn't damage someone for life.

It's been a mild winter, but I realized this morning that the span of a winter is still a long time in kid years. In the interim, our kid forgot about shorts entirely.

So when Nick tried to put a pair on him this morning, he was incensed.

"NO! Take them OFF! These pants are BROKEN! I want good pants!"
Posted by Lemon Gloria on Wednesday, March 14, 2012