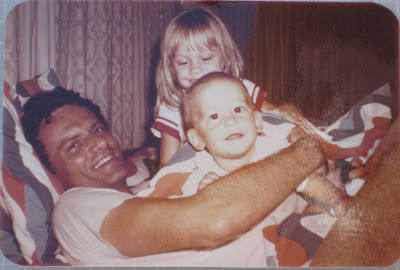 It's been three years since you left us. Three years last month.

Now I can talk and think about you without crying. I think that tremendous, terrible loss is like pregnancy and childbirth - we're programmed to forget the truly painful, because otherwise the human race would not endure.

Well, not forget. That's the wrong way to put it. But the memories cease to be so visceral, to tear you apart when they surface. And for a long time they lived so barely under the surface. I'm pretty sure that my pain was constantly visible for ages.

So I can remember how much losing you hurt, but I have distance from the rawness.

For a long time I felt like being angry at you for anything from the past - and most of all for leaving us so devastated - was betrayal. I tried very hard not to be angry, or if I was, not to voice it.  Now I can admit to anger, and it is brief.

Mostly I just miss you.

I had a baby, a little girl, in April. Maybe you know this already. We named her India after my birthplace. She's absolutely lovely. You would adore her.

It seems like her eyes will stay blue, as Jordan's did. So she too has my eyes, which I got from you.

Nick's father is now the only grandfather they will have, and this pains me I think more than losing you myself. He's a nice person, but not remotely interested in children.  I hear Jordan talking enthusiastically about Grandpa and it kicks me in the stomach, since he spent a week here and never once interacted with my son.

I know you'd be down on the floor playing with Jordan, tickling him, laughing with him. You'd hold India and delight in her. The unfairness of this gets me at my core.

Then I chide myself for pulling fairness into it, because the world doesn't operate on the fairness system.

This picture brings back memories. I remember how you used to read on your bed, with your knees up, and J and I would crawl under your knees, back and forth, until finally you would grab us and tickle us and we would squeal with fear - we're going to be tickled! - and delight. And do it over and over and over again.

You know, Nick, who is as steady and dependable as time and the tide, once said to me that while he doesn't have my lows, and certainly doesn't envy them, sometimes he envies the highs. He says you can't have one without the other, and I think that is true.

And I know I wouldn't trade you having been my dad for someone more even-keeled. Although I wish the lows weren't so low, I know we wouldn't had the high times either.

I reach back into memory and there were many great times, there really were.