These past two months have been huge for Jordan. Huge.

Every once in a while both pairs would be too dirty to wear, and we could cajole our boy into shorts. So Nick suggested we just say the cold pants were dirty every day.

Fortunately Jordan bought it, rather than being all, "Then do some fucking laundry, why don't you?" 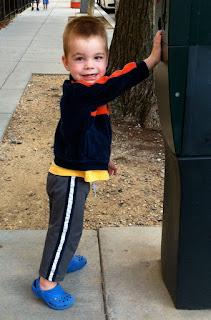 He still asks for them when he's really tired and going down for a nap. But otherwise, we are in shorts! Which is of course fantastic. Because I kid you not, this was him in July. If you enlarge the photo you will see the beleaguered state of the Cold Pants.

Also, he wanted the jacket because, although I pointed out that it was VERY HOT, he said, "But when it's done being hot, it's going to be cold."

He had a point. Plus, he's happy to remove a jacket in the heat. Just not the Cold Pants.

Last week we went to a friend's house for a long weekend. This friend has a yard.

And here's what we learned: Jordan totally knows when he needs to pee. And poop. He just doesn't like the idea of the toilet or the potty.

By "doesn't like" I in fact mean gets all kinds of worked up, ranging from whining to actual hysteria. Like some giant hand is going to reach up out of the toilet and grab his crotch and pull him down into the pipes. Or something along those lines.

I haven't asked if that's his fear, because why suggest, right?

Much like my brother and me and our Bangladesh childhood antics, this kid loves to pee outside! And so we did a lot of nakey nakey time.

He loves nakeytime! He loves to pee on plants! He can leap up and say, "I'll be right back!" and run out the screen door and pee! And then come back and go about his day.

So I thought, why not see if he'll poop outside as well? He was game for it so out to the yard we traipsed.

I did manage to get him to squeeze out two little turds. We were so proud. (Yes, I've horrified a couple of my friends with this admission. Feel free to be horrified.)

Now that we're back, it's all pull-ups and diapers, all the time. No fucking way is he going to let loose on the potty or toilet.

Nick suggested we put a big shrub on our back deck so we can continue the outside potty training, but really. No. Just no.

Because then what? We get him a special wagon to haul his pee-shrub around with him?

But I still see this as progress.
Posted by Lemon Gloria on Friday, August 10, 2012