I don't have anything big to say about Halloween BEYOND OH MY GIRAFFE IS IT FUN WITH KIDS! 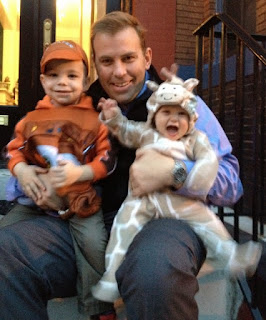 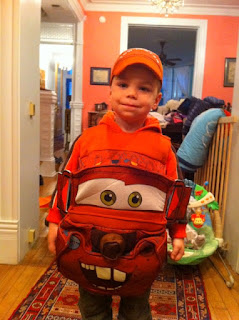 Last year I got Jordan an adorable, warm, fuzzy little dragon costume. He wanted nothing to do with it. "Take it OAF!" was all he said. Over and over and over.

I took it OAF! I returned it! And that was that.

So, I don't know how familiar you are with the Cars movie, but Jordan has watched it approximately 54 million times. He loves Lightening McQueen (who he refers to as LA QUEEN!), and he loves Mater. Tow-Mater. The tow truck sidekick.

We told Betty that Jordan was going to be Mater, as in Tow-mater, for Halloween, and she said, "Well, then, I'm going to be Q!"

India had no say-so in her costume, but lemme tell you, she was the cutest giraffe I've ever seen in my whole entire life. She beamed and squealed in delight the whole time.

Jordan practiced saying "Twick or tweat!" and he said it so sweetly at every house. He gently took one piece of candy, and (with reminders) said "Thank you!" at each and every house.

Well, except one, when he said, "GBTFHMMFFF" and we realized that his jaw was basically cemented together with Milk Duds.

Email ThisBlogThis!Share to TwitterShare to FacebookShare to Pinterest
Labels: i'mamama, love and happiness, the Betty, the boy