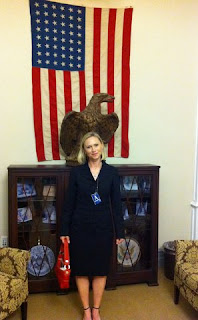 Last Friday, after a morning with my baby, I hurried into a shower, suit, and makeup, grabbed suitable heels and purse, slid on my flip-flops, and rushed out of the house, down the street to the bus stop.

I usually wear a cross-body bag that fits things like commuter shoes, diapers, toy backhoes, and the like. But I chose a more professional purse for the heading to the White House occasion. And this bag, I realized on the bus, would not hold my rather large and sturdy (and bright blue and green) flip flops.

I didn't have time to go up to Nick's office, so I asked the guard in his lobby if there was somewhere I could hide my flops. He very kindly let me stash them in the plants.

(So now I feel like when I was so pregnant and itching to sneak into the koi pond at Nick's office that even though Nick sternly forbade me, maybe the guard would have let me??)

Anyway. Because suicide prevention is not about what you wear, ahem, Lisa., on to the meeting.

President Obama needed the Roosevelt Room in the West Wing, and so, sadly, we got to spend about five minutes loitering in the West Wing lobby, and then were directed to the Old Executive Office Building (OEOB - try saying that three times). Which, still awesome. We loitered in the West Wing!

Plus, it's not like the OEOB isn't spectacularly impressive in itself. 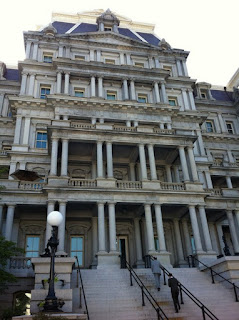 Since we'd gotten there at 2 pm, as instructed, and been the first people processed (big security!) we had plenty of time before the 3 pm meeting. Our leader suggested heading down to the cafeteria. Everyone (else) got a drink or small snack.

Nick hadn't had lunch. And thus walked into former Secretary of State Cordell Hull's office with a giant plate of BBQ. (Which was done by the time the meeting began. Thankfully. I was all twitchy. He was all, "What? I didn't get lunch!")

We, AFSP staff and walk fundraisers, met with Obama's and Biden's senior staff - coincidentally members of the Army, Navy, and Air Force. The administration is putting a lot of focus on mental health and suicide, as it's an increasingly dire issue for current military and veterans.

We went around the room introducing ourselves and giving our reasons for involvement, and that was when my tears began. The officials were very engaged and asked what our priorities were, and shared the administration's goals for decreasing the stigma of mental illness and lowering suicide rates.

I wish I'd taken pictures of the room, because it was gorgeous, but I was shy and nervous. By the end of the meeting, I felt comfortable, but by then we were all heading out to take group pictures over by the White House! 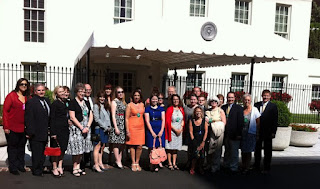 Here we are on the OEOB steps, with the White House behind us. Just imagine, because I know the background is too bright. But look how attending-an-official-meetingy we look! 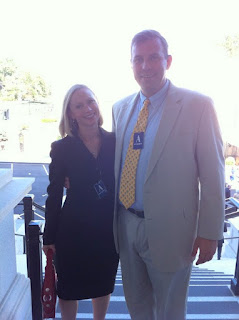 Wait, don't imagine. Here it is. So close! And yet so far! 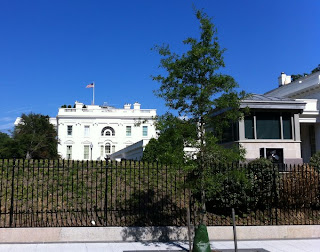 And then we left and got a drink - because all of those stories of loss - loss of children, loss of more than one relative, loss of people so young and so loved - it filled me up with sad, and opened this sealed place where I suppose I store my grief most of the time.

I believe more than ever that we walk around with splinters and shards within us. We protect ourselves, we heal, but they are never gone.

So then in case you're wondering, I retrieved my flip flops without incident from the plants in the lobby. I'd still get in that fish pond in a hot second if I didn't know I'd be in Big Trouble. With a capital T, which rhymes with P, and that stands for...Pond! Koi pond!

Email ThisBlogThis!Share to TwitterShare to FacebookShare to Pinterest
Labels: clothing and shoes, grief, life in DC