How to surprise a rabbit 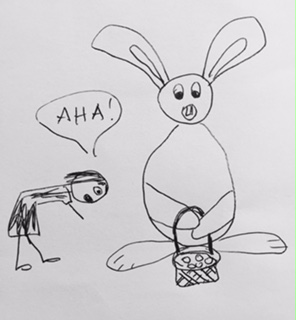 Have you ever stopped to wonder about the sex of the Easter Bunny?

I never had. All those years of believing in the Easter Bunny, and it never occurred to me to wonder if it was a boy or a girl. In fact, without ever giving it any thought, I'm sure I grew up saying "he" and "him." Of course.

Then last week, my kids were all, "Mama, is the Easter Bunny a boy or a girl?"

I almost automatically said, "A boy." But I didn't. I paused.

(And also, I was thinking, it doesn't actually matter, because he or she is actually fictional, and yet we're going to perpetuate this weird lie about a giant bunny that travels the world to hide candy around your house for as long as you are willing to buy it...And when I stop to think about it, it is kind of creepy that a big rabbit sneaks in while we sleep. But then again, he or she does bring Cadbury eggs...)

So I said, "I have no idea. I've never seen the real Easter Bunny. What do you think?"

Jordan decided that he would hide under the couch all night, and then when he saw the Easter Bunny, he'd ask.

India, on the other hand, was all. "I'm not going to ask. I'm going to jump out from under the table and check."

Email ThisBlogThis!Share to TwitterShare to FacebookShare to Pinterest
Labels: i'mamama, India, love and happiness, the boy