Three introverts walk into a bar... 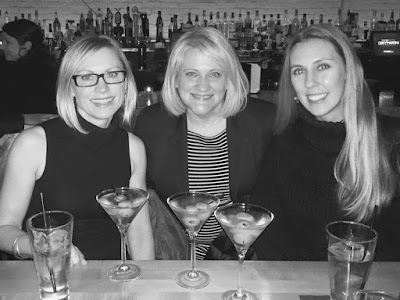 A couple weeks ago, I caught up with two blogfriends over fabulous martinis.

The truth is, I never knew either Kris or Megan in person all that well. But I felt like I knew their hearts, and they felt like they knew mine, and when the opportunity to catch up presented itself, I jumped.

There aren't many people in my current world who were part of the microcosm that was the DC blog scene in the aughts.

Ten years ago, blogs were rather new to me, but as it turned out, I was late to the party, as people had been blogging for years. In fact, the DC blog scene was on the wane, although I didn't know it.

For me it was fresh and exciting, and I was single and heartbroken, and I threw myself in with wild abandon. I could pour my heart out, and not burden my friends. There were strangers on the Internet who would actually read what I wrote!

I started going to the DC blogger happy hours. I made blog friends, in person and virtually. Like Internet dating, which I'd also thrown myself into, there was an entire world of people out there that I wouldn't have known otherwise. The blog scene became a huge part of my world.

But unlike Internet dating, many of us were telling people, up front and in public, what was in our hearts.

And so I got to know people, in an odd and very intense way, well before I actually met them in person. There are still people I care about that I've never actually met.

Lucky for me, I did meet Megan and Kris in person. I read their blogs, and I loved how funny and real they were. In person they were just the same--hilarious and so very candid.

They, like many others, had been blogging for a while before I started. Their posts were eagerly awaited. They got lots of comments! People were in awe of them! Kris presented at BlogHer! She was famous! She knew really really famous bloggers!

Like many others, they stopped, while I was still fully immersed. Actually, Kris briefly started another blog (hooray!). And then she stopped for good.

I missed knowing what was going on in my friends' lives without seeing them in person. Do you know how perfect blogs are for introverts? You can know all about your friends actions, feelings, kids, and such, without leaving your house!

Best ever. And then it was over.

But fortunately there is Facebook, and we are friends. And so, as Kris and I realized when catching up a couple weeks ago, seven years can go by without seeing each other in person, and somehow it doesn't feel like it.

But it had been that long since we had actually shared drinks and stories. It was fabulous. They're both still hilarious and so very real. They just don't write their feelings on the Internet for all to scrutinize anymore.

We reminisced about the bloggy days, and the characters in them.

The blog world was a weird and intense place, much like down the rabbit hole. You could know such personal things about people you didn't actually know. We talked about the intense moments. I remembered when Kris's father died. When her cat Bug got cancer. When Megan ran into that guy at the airport. We talked about Stacy, with whom Kris was in-person friends.

It may sound odd to talk "remember whens" for events you weren't actually part of. But they felt so real. When you read heartbreaking things written by a terrific writer, you are right there in it with her. And I was, over and over. Oh, I was.

For me, getting into blogging helped heal me at a time when I needed a great deal of...well, everything. I needed to write my feelings. I needed support. I needed to feel connected. I needed people who understood.

I got all those things and more. I made some dear, dear friends. Friends I may not see in person often enough, but who I love nonetheless.

Sometimes I feel dorky still blogging, like I'm sitting at the party eating the last of the onion dip long after everyone has left. But my blog has been such a part of my life for so long now, I'd miss it if I let go.

It sounds cheesy to say that falling into the blogworld was a gift, but it was. And I am so lucky for it.
Posted by Lemon Gloria on Tuesday, March 08, 2016