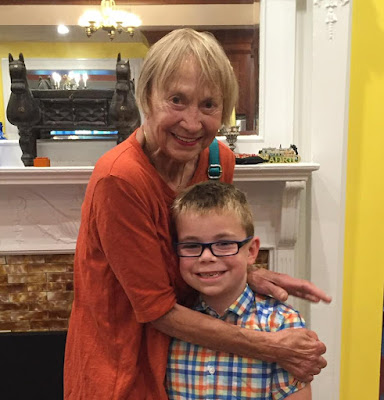 Today is your birthday.

Last night, when Jordan was drawing a cake on your card, he asked, "Do I have to draw ALL the candles?"

I said there was no need to draw all.

He loves math, and after one of the children at his school died, he became preoccupied with death. Now he regularly counts all of us back from 100. The assumption is we will all live to 100. He regularly asks our ages, so he can subtract them.

And then he half-cheerfully half-despondently tells you how much time you have left. As oldest, he lists you first. He frets about it; you can tell.

We grow up defining who we are in relation to others. I was a daughter before I was anything else. Now I'm a daughter, mother, wife.

I don't know how my kids define themselves, but I know how they define you. You are THEIRS. Their Nana. You are theirs to crawl in bed with. Jordan did this long before India, and he clearly still feels proprietary.

You're theirs to garden with. Theirs to walk with to CVS (and you always share your Mentos).

You were the one to take them each out for celebratory dinners on their respective first days of school. You are the banana bread maker, and the one India asks to take her to the background (which is what she still calls the back room) to do laundry. Oh, the thrill of putting things in the dryer!

They relate the news that they see on your TV, since we never have the news on. The outrage of Trump. A baby that died. Flooding. Obama. The fact that they have seen it and I have not makes them authorities; they love this. 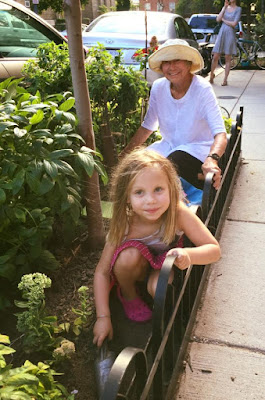 Last weekend Nick, the kids, and I were heading out on bikes. The kids were riding on the back of mine, and Nick on his own. I said, "We're taking a family bike ride!"

And Jordan said, "That's not exactly correct." I assumed he would point out that we weren't each on our own bikes.

But he said this. "It's just part of the family, not the whole family. Because Nana is staying home."

The longer I live, the more certain I am that nothing in this world matters more than love. The people you love, and those who love you. Family, whether by blood or by choice.

I cannot think of one single thing that matters to me more.

I wish you a great birthday and a year of joyful surprises and all things delightful.