Kyrie eleison down the road that I must travel 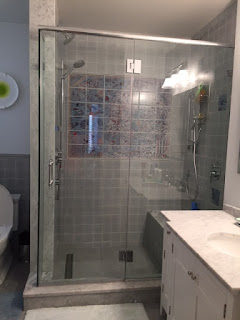 We have this delightful new shower in our master bathroom.

Or rather, we now have a bathroom with a shower, and it is new.

I cannot figure out how to take a non-glarey picture of it. Because with the lights off, it is dark and grainy. Anyway. For now you get the idea.

For seven years the tub in our bathroom didn't work, and as we approached home renovations on a most-to-least-crisisy basis--starting with lack of kitchen on the ground floor, lead pipes, cloth covered wiring, and rotting walls and floors and things of that nature.

We had other places to bathe in the house. So we viewed ours, decrepit as it was, as last priority.

And when we did the bathroom, we did it up big. I bought a spectacular mural from my friend Christine at William Morris Tile.

I have many things to say about it, and it deserves a separate post, so I won't get into it here. But it is beautiful and really interesting.

As for the house, I'd like to say that after seven years we are actually done. We are mostly done.

The fourth floor (or floh floh, as India calls it) is where we basically lived our first year here. It has had no renovations. One day we will have to. But not now. The leaks are stanched, for the time being.

Until a month ago, Nick spent seven years bathing and dressing up there daily. Without exaggeration, he caulked the upstairs tub weekly.

There is dangerous old caulk. But is there ever such a thing as too much caulk?

I dunno. But I think we can agree that seven years of caulk is a lot of caulk.

We now have this super duper awesomely beautiful shower with multiple shower heads. One side is for Nick, and the shower head is like 8 feet in the air. And the other side is for me. And they each have a hand held component.

Now the kids and I shower together a lot, which saves time and is actually something they get enthused about. They like the separate showers, the room to play, and the fact that they get to squeegee the glass walls.

It is perfect. Everyone has enough water, and I can have mine scalding hot and don't have to tepidize it for anyone.

There is plenty of room, but it's still a shower. We're in reasonably close quarters.

Last week, India reached up, put her little hands on my boobs, and tried to push them up.

And she said, "I'm trying to help them. Why don't your boobs stay up, Mama?"

I bit my tongue, thought I was tempted to launch into a whole thing about babies and nursing and how really, mine stayed up just fine before. And actually, it was all their fault.

Before I could say anything she said, "You know. Nana's boobs don't stay up either."

And there you have it.
Posted by Lemon Gloria on Friday, September 16, 2016