OK, so now you know 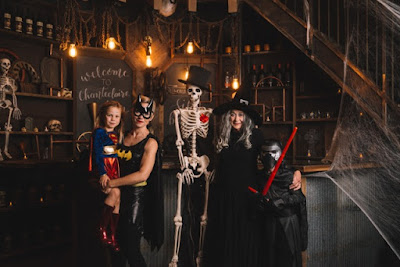 Last weekend I took Betty and the kids out to Leigh's farm. She has a big Halloween party every year, and this is the first time we've been.

It was amazing. Her silo bar is the photo backdrop. The barn was filled with skeletons and corpses and cobwebs and other creepy things.

I let Jordan and India eat as many treats, including cupcakes with disgusting gummy eyeballs on top, as they wanted. They were absolutely delighted with the whole affair.

And also cracked out of their minds on sugar all weekend.

I arrived without a costume. Luckily, Leigh has a stash. She lent me the Batwoman costume in the picture above.

It felt fantastic. I absolutely loved it.

Hand to God, I'd wear it all the time if I could.

Seriously. I would wear it to Target. To pick the kids up at school. I'd walk the dog in it if I had one.

So, I just saw this article that said that electric eels sandwich their prey to double the shock. And I was thinking, you know, that's a superpower I'd really like to have.

Which, I guess, is more villainous than hero-y.

Unless I was shocking bad people.

Would that be a cool thing to be able to do? I mean, if I could be invisible, or read minds, or fly, I might choose those over shocking people. But I certainly wouldn't turn this ability down, if offered.

Which superpower would you choose if you could?

I've said before that it would be terribly useful to be able to puke at will. So when someone is being hugely malignant, you could "accidentally" vomit on them.

It would be so satisfying.

You'd apologize profusely, of course. I mean, unless they were a mugger or rapist. Then you'd scream and run away.

And you wouldn't actually hurt them. Not physically.

Also, I want to start taking Krav Maga. I've only been mugged once, but you never know.

I'm not sure what it says about me that I'd like to have the ability to really hurt someone. Because as much as I joke about stabbing my husband, the truth is, I'd never do it.

But I'm also small, and a woman. I'm very careful if I'm walking alone at night. But I still think it might be good to acquire some skills.

On a related note...this election, man.

Nick has discovered the joys of Facebook, and he's posted a couple times about politics.

From these posts I have learned that he has a couple smug, Trump-voting childhood friends. Who have no good pro-candidate arguments. They mostly respond with insults and references to "Killary" and stupid memes.

I've told Nick that he'd better never introduce me to these men.

Because I will dickpunch them for sure.
Posted by Lemon Gloria on Thursday, November 03, 2016