So now let us speak of something awkward

You know how I wind up writing about stuff that most people don't talk about in polite company because I really need to talk about it?

Now I need to talk about perimenopause. I do

There are going to be words like boobs and period and such.

And now you've been warned.

Perimenopause, which I guess is also called premenopause, for those who don't know, and until recently I didn't, is the period (heh) of time leading up to menopause during which your reproductive hormones begin to decline. This can be a short number of years or a decade, as I understand it.

Hormones are tricksy, and everything affects everything, and you might have very few symptoms or your experience might be extreme. You just don't know until you're in it.

And even when you're in it, month to month you don't necessarily know. Which, for me, makes it not unlike depression.

Several months ago, I thought my antidepressant wasn't working, or that maybe the dosage needed tweaking. Because I couldn't stand anyone in my family.

Nick would walk toward me and I'd think, "Come closer. SO I CAN KICK YOU."

I snapped and snarled at all of them. I had no patience.

This continued for some days and I was about to reach out to my shrink and ask him for help. And then I got my period. Immediately, much like Dorothy landing in Oz, the world became bright and happy again.

In retrospect, I have always reacted extremely to hormones. What can I say? I'm a delicate flower.

I was raised believing condoms were the answer to most of the world's problems. Not everyone is in agreement, and I had several stints on hormonal birth control. I turned into a raging lunatic. Crying easily, angry, completely irrational. All the time.

Basically when I think about it, it combined all the difficult parts of being me, but taken to extremes.

For years, coasting on my own hormones, I've had a pretty even cycle. Sometimes I'd have PMS and my boobs would get very sore, and I would get mad at them. But still, it didn't last. But it was generally brief, as were my periods.

And on a related note, India calls it my pyramid. "Do you have your pyramid, Mama?"

She also learned about period undies when one day she said, "Don't put those on! They're dirty!" I know, I know, this is a horrifying topic. I told you.

I do have some fear that she's taken this information to school, but what are you doing to do? Her mama has pyramid undies. At least it's true. (Unlike the time she told her class that for time out we put her in the bathroom after Nick poops.)

But now. Now I have PMS on steroids. My boobs are so sore. I extra hate everyone. I eat so much sugar and junk food.

After the kids went to bed last night, this is what I had for dinner. Gelato and Cheez-Its. 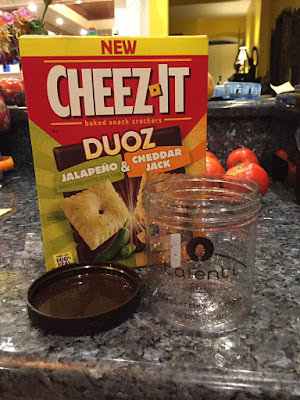 What I don't know is when this annoying ride it will end. It's not consistent month to month.

And this misery could end in a minute, or tomorrow, or next Friday. Your guess is as good as mine.

This morning Nick called and I guess I snapped at him because he said, "I really wish your period would start."

And I snarled, "Just imagine BEING ME right now."

Also, hand me those Cheez-Its and come over here so I can kick you.
Posted by Lemon Gloria on Monday, September 18, 2017

Email ThisBlogThis!Share to TwitterShare to FacebookShare to Pinterest
Labels: boobs, health and compulsions, stuff that people don't talk about