How to have lice 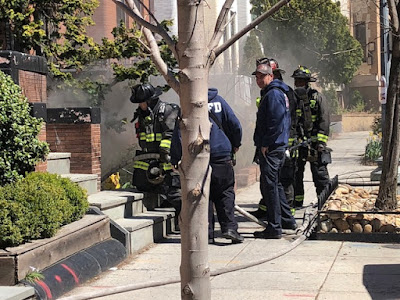 When we get lice, we don't like to just get lice.

We like to pair our lice with something calamitous, like thieves coming through the skylights and stealing laptops and jewelry.

But now we have bars on the skylights.

So this time, we paired our lice with a house-next-door fire.

First we discovered the lice. I think last time we had the thieving first. I don't know that we're particular about order, really.

Last weekend, we all had plans, and we were all late leaving the house. This wound up being a blessing.

I was late to take India to meet friends. I was upstairs rushing around because the lateness! The lateness of leaving late! And then India said, "Mama, come downstairs! Jordan smells smoke!"

Jordan has this nose. He can be standing way across the room and be all, "Ugh. Your breath smells like onions."

His nose stands in stark contrast to his ears, which function only selectively, and not at all when you're standing right next to him telling him, in no uncertain terms, that it is time to brush teeth.

In any case, I came downstairs and the three of us were trying to figure out where the smoke was coming from. And then I realized that the smoke detectors in our basement tenants' apartment were all screaming.

I yelled for Nick to come down. It smelled like plastic burning.

Nick said, "I think it's coming from the closet."

We have this storage closet that used to connect the basement and the ground floor. I probably wrote about it because there were these precarious stairs of death down to the dark and deathy dungeon where we did our laundry when we first moved in.

Now it's where we store our Christmas tree and coats and such.

So Nick went in to try and see if there was a fire in the back of the closet. He started flinging coats out and pulling out boxes as the closet filled up with smoke. Smoke started spreading out through the ground floor, and I ran to call 911.

I didn't realize I was scared until the woman on the phone said, "It's going to be OK. Stay with me." And I realized I'd started crying.

She told me to get everyone outside.

One of our tenants and their dog were already out front.

I'd called 911 a few months ago because all of our basement smoke alarms were going off, and we couldn't figure out why. (Issue turned out to be batteries. Nick replaced them all.)

So I recognized a few of the firemen.

They checked our basement and ground floor, then determined it was our next-door neighbor's house.

Nobody was home, so they pulled out axes. They went into the basement with hoses pumping.

I'd never seen this happen anywhere outside of a Richard Scarry book.

A little while later they emerged with a charred and smoking futon, which they then hosed thoroughly on the sidewalk.

The inhabitant of the basement arrived about 15 minutes into the operation. He'd been out walking his dog. He told Nick he'd left a candle burning.

A few minutes after that, we met a woman who'd just moved into the house a month ago. She'd been home the whole time but not known what was going on. She told us she was reading upstairs and  smelled smoke, so she looked out the window and saw all these fire trucks.

Which says to me no smoke detectors were screaming in their house.

I feel exceptionally lucky that we were home, and that Nick is assiduous about keeping smoke detectors, fire extinguishers, filters, etc up to date. I feel lucky we smelled the smoke as early into the fire as we did, and that the fire fighters were immediately responsive.

I thanked one of the guys for arriving so quickly and he said, "We were eating lunch literally around the corner."

I contend it is a universal belief that firemen are hot. They will rush into buildings that are ON FIRE to save people.

What did surprise me, however, was that a couple of them lit cigarettes after the fire was out.

We're in a row house, and ours houses were built over a hundred years ago. This means we share walls, that beams come through.

This also means that our ground floor still smells like smoke. But nothing in our house was damaged.

Most importantly, nobody was hurt.

What it's made me realize is that we are vulnerable. Lots of things in life are out of our control, yes. But we try to keep our house as safe as possible. But! Our houses all connect. Any of our neighbors could be smoking in bed or leave candles unattended or what-have-you.

One of our neighbors said that 15 years ago an entire row house burned on our block. He asked if we have a fire emergency plan.

We do not. Do you have a fire emergency plan? Do you know how you'd get out?

In our house, have two options--going down and out the front door, or up to the roof. But we've not practiced this with the kids or my mom. Am I confident my mom could get out the little window leading to the roof, or jump over to a neighboring rooftop?

So there's that. And that's where we are. And where we were.

Oh, and we also oiled all our heads and combed repeatedly with the lice comb. Because, you know, the lice.

I was pretty shaken up for a while. That night, when we were getting ready for bed, I said, "The kids and I should make cookies to take to the firehouse."

Nick said, "That would be nice."

Then I said, "Although if we run out of time maybe we could just drop off a couple cartons of Marlboros."