A couple days ago, I posted something about wanting to put the Eagles on a continuous loop in the waiting room of my shrink's office.

In response, my friend Matt, who I've not seen in decades, sent me this clip above. I responded that it was funny, and that Nick hates the Eagles as well.

(Inconceivable, but true. I'm all, Nick, why don't you come to your senses? You been out ridin' fences for so long now...)

Matt and I had that brief exchange. Then that same evening another friend and I were messaging. She's in a leadership position, and she has some constituents who behave very badly. We were going back and forth about their behavior, and how she has to be diplomatic in her position.

We wrote lots and lots of messages back and forth. She described and I expressed sympathy and outrage.

At some point I said I would tell them to fuck off.

And in the middle of this volley of messages, Matt messaged me saying he doesn't actually hate them, and he mainly thinks about them in the context of their era.

It fit so well with the other conversation. I thought she was being exceedingly kind and generous to a group of rude, obnoxious people.

So I basically responded that I would not be that diplomatic, and I'd probably tell them to their faces that they're assholes.

Yesterday morning out of the blue I got a message from Matt with a random, "LOL".

Which was a totally innocuous response to a crazy lady who feels the actual need to tell a band how much she hates them like right to their faces?

I was immediately all, OH NOT THE EAGLES! I like the Eagles! That was about these other people you don't know who behave terribly.

Fortunately, this was easily explained and not terrible like the time I messaged one coworker with the phrase "sucks big fat moose weenies" thinking he was the other coworker who actually used that expression.

It was also not as bad as when, last month, I confirmed with my trainer that I'd see him at noon, and then added I was a little nervous about the ass licking. 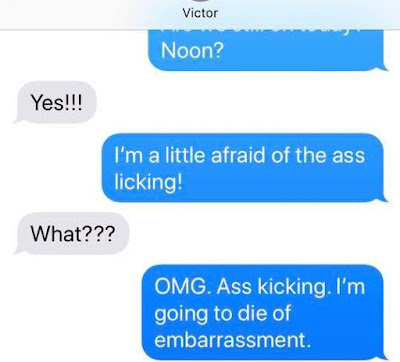