One ring to find them 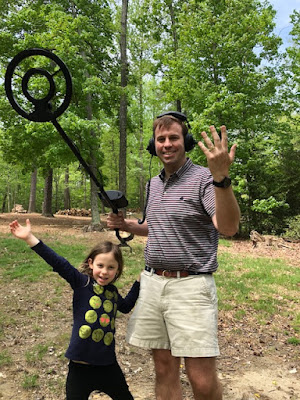 A week ago Saturday, while I was reveling in my reunion, Nick was out in the wilds of Maryland, camping with my children and the Cub Scouts.

It wasn't really the wilds. It was a state park with camp sites.

(Also, as an aside, let me say that there are a number of younger sisters who attend the Scout meetings with their brothers. India, for one, is very interested in joining.)

So anyway, they went camping. They had a cookout, and ate s'mores, and sat around the fire and then they crawled into their sleeping bags in their respective tents and went to sleep.

My husband took off his watch and wedding ring and put them and his phone and various and sundry other items in an inside pocket of the tent.

He put this collection in the pocket on Jordan's side of the tent. And apparently Jordan saw Nick's stuff in there and lost his mind and so Nick wound up moving it. All but the ring.

You see where this is going.

In the morning, he took out all his items from the pocket, and started packing up.

It had rained a great deal in the night (which sounds very terrible to me), and he shook the tent out throughly before folding it.

They packed everything up then went on a hike.

Nick and the kids were at lunch before he realized he wasn't wearing his ring.

When  they got home he looked through everything--the tent, the sleeping bags, everything. But it was missing.

I, for my part, was trying not to be mad at him for wearing his ring camping. Who effing wears their ring camping?

But I am a person who will leave my rings off for weeks at a time, though I love them. I'll take them off for the pool and forget to put them back on.

Being a wife and a mom are now overwhelmingly my identity, but whether or not I have my rings on doesn't matter to me.

I love my engagement ring. And my wedding ring was my grandmother's. It's a simple white gold band. She wore it for over 60 years, and in that time, the notches on the sides smoothed themselves. You can barely see where they were now.

I do not wear the band alone, for fear it will slip off. The engagement ring is tighter, and holds it. But sometimes this all just feels like too much.

I don't wear them when I travel, because I don't want to take them off at night in strange places. And I have lost the ability so sleep in jewelry. It's party of my whole Princess and the Pea sleep business.

So as I said, I was trying not to be mad. But why, why why wear them camping?

To this Nick said he wears it all the time. It's important to him. He just feels better with his ring on than off.

I could not fault him for that.

Now, I also feel strongly that things are just things. People are what's important. And yet, this band was made by my mom's jeweler, who escaped Cambodia under the Khmer Rouge. It has our initials and wedding date, which Nick used as proof to buy discounted caulk.

(Yes. It always comes back to caulk.)

It's the ring I gave him when we exchanged vows in front of all these people who matter so much to us, and who, like my dad and other dearly loved ones, are no longer with us.

It's a thing, but it's not just a thing.

I was upset. Not mad at Nick. Just upset.

Last week I was in the office talking about the lost ring, and my friend Tadu said we should get a metal detector. She said she had a friend who had lost her ring twice on the beach. And twice she'd found it.

So I asked on Facebook if anyone had one to lend us. Nobody had a metal detector. But I learned that lots of people have lost wedding rings.

I was glad I asked, because I got some great stories.

So Nick bought a metal detector on Amazon. And early Saturday morning, we headed up to Calvert Cliffs.

We were walking around the camp site, and as Nick had mentioned, it was on the edge of a big hill. There were rivulets down the sides.

The kids and I started skibbling and sliding down the hill. I was thinking there was just no way we were going to find the ring.

Look at all the nature. There is so much nature, and it's such a small object. And round and rolly, as rings tend to be.

Then suddenly Nick said, "I FOUND IT!"