SD Day I'm not even sure what day it is anymore 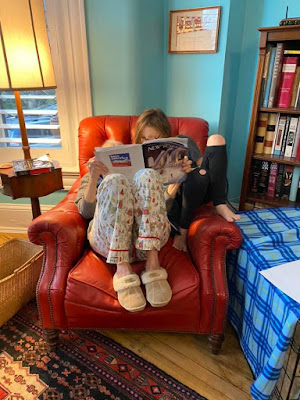 As it turns out, today is Wednesday. I'm pretty sure.

I just checked. It's definitely Wednesday.

Also: my mother may not have gotten out of her PJs today, but the rest of us did. I'm happy to report we all brushed our teeth.

Yesterday we got a call from one of India's teachers, and today one of Jordan's teachers called. It was lovely that they called to check in and to talk to the kids.

I was completely honest with both of them: we've done nothing academic. The kids have been reading in English, not Spanish. But that's it.

Frankly, I'm not sure that Jordan will do any of the schoolwork in this period. India asked to do some this afternoon, and she did math. Up to a point. And then she was all, "UGH! This is just like doing schoolwork!"

Jordan's teacher offered any help we might need, and said he doesn't need to do more than 30-60 minutes per subject per day.

But there's just no way that's going to happen.

We are doing puzzles. Jordan is reading The Hobbit.

A friend suggested we play Cribbage to use some math. I am going to look into learning it.

Part of what I find hard is that I have to be involved in all of this. Not hand-holding but right there, encouraging, participating. It's kind of exhausting.

Today I didn't make them do anything. We had a totally peaceful day. We finished our puzzle. We hung out. They watched an embarrassing amount of television.

Jordan walked the dog at some point.

But my idea to chronicle this historic time (writing!) was shot down. Jordan said, "YOU can write about it."

Also, our running has gone straight to hell. As it turns out, they're not remotely interested in running just to run.

Even for money or screen time.

I asked friends if they had suggestions for workouts for kids, and so we did Beachbody on Demand for Kids, GoNoodle, and PE with Joe Wicks, all of which were free.

They did this for screen time. Not for joy or health.

I feel like Bridget Jones but I'm wondering if I should start noting my exercise and alcohol consumption.

I think she also weighed herself daily, and if I do that I will go down an obsessive rabbit hole. So, no weighing.

Apparently regular old vodka is just not strong enough for hand sanitizer, which is too bad because I was thinking I could mix it with aloe, which we have a jug of in the pantry because at some point I was going to make healthy juice kind of concoctions but never did.

But I read that vodka doesn't have a high enough percentage of alcohol.

So then I was thinking, well, vodka and aloe could be a calming and healthy-ish breakfast drink...

Maybe mix in a few greens? Some chia seeds?

I know. It's a slippery slope. I should stick to protein smoothies.

See, my cough is better but when I'm out walking the dog, as soon as I see someone, I get the urge to cough.

I bet vodka and aloe could really help with this.