It is an ancient Saab, And it stoppeth one time of three... 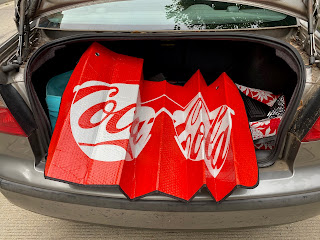 Until this February, when Nick's car basically died, it was our "new" car.

As it turns out, Nick and I are both people who keep things we like forever. I still have boots I bought at J Crew in 1998. Which makes them about the same age as Nick's old car, now that I think about it.

But back to the Albatross.

For a few years, it was great. To start with, it had so much power--so much more than my Civic. There's this terrible coming from the left side merge onto the GW Parkway, and in my Civic I'd have to really gear up for it--vrrooom vrooom--and make sure there were absolutely no cars in sight.

With the Saab I could just hit the gas and it would fly.

It also had lots of automatic things and buttons for functions I didn't even understand. (But honestly, I was coming from a manual window roll up car.)

It also had a tape deck, which was kind of awesome when I unearthed to mixtapes made by long-ago paramours.

It was all fabulous. Until that day it just plain stopped in the middle lane of Rock Creek Parkway at rush hour. You may remember my complete and utter hysteria.

We had it towed. We took it to a Saab repair place. They couldn't make it stall. They ran it for days and took it out in the hot heat and still it would not stall.

They ran through several tanks of gas. No stalling.

But it was still cheaper than buying another car.

Eventually the Saab people decided that it was bad gas. Like, there must've been some water in the gas and it turned into steam and stalled the car or something like this.

I didn't have a better explanation. And because I had called the engine light the yellow submarine light. and don't have car vocabulary, I also didn't have a lot of credibility among Nick and the Saab fixers.

Anyway, they "fixed" it. Except.

Some months later, on I-95, that Stygian place, happened again. I determined that it happened when it was very hot and we stopped the car and then started it again without having given it a chance to cool down.

And it happened another time.

Basically, I stopped driving it when it was hot.

I took to calling it the Albatross. Which initially insulted Nick, as it was his dad's car and all. I decided there was some emotional attachment.

Since I rarely drive, it was not such a big deal. I'd take Nick's car to Costco.

In the summer of 2019, we embarked on a big Midwestern road trip. In the planning phase, Nick suggested we take the Saab, driving from DC to Minnesota and back. Since, he contended, it was fixed.

I said not one chance in hell was I going to risk being stranded in Ohio, Michigan, Indiana or anywhere else, thankyouverymuch...

We flew to Minneapolis and rented a terrific car, and had a great time. And somewhere in the Midwest, where precisely I cannot recall, I received a call from my husband.

Because in fact, he got stranded somewhere near Bel Aire, MD.

That quitting thing the Saab would do? Where the yellow submarine light would go on and you would push the gas pedal and it would go "Rrrrrrrrr" but just not go?

It did that. And he was stuck.

And then boy howdy did he agree that there was something very wrong with the car that new gas wouldn't fix.

But as luck would have it, he was stranded near a service station owned by a man who loved Saabs. And who fixed it.

So that was a year and some months ago. Then this summer, juuuuust as the hot hot DC fires of Mordor  heat kicked in, the air conditioning stopped working. As did the anti-lock brakes.

They were going to be expensive to fix. So we didn't.

This unfortunateness happened just before Betty, the kids and I loaded ourselves into our brand-new family SUV and toodled off to Michigan.

Ordinarily, Nick would take the bus to work. But with Covid, he was driving. So he drove back and forth in a sweaty little hotbox.

We continued to use the car as needed, but really as rarely as possible.

Until one afternoon I had to take my mom to an eye appointment with a specialist in Friendship Heights. I told Nick I'd take my car.

We were driving back with all the windows down for breeze, less than a mile from home, when the car made these CRRRRSHHHSHSGGHRRR RGRRSSHSH SHSSSKRUNK kinds of sounds and became practically impossible to steer.

I pulled over to the side and called Nick, and he asked what I wanted him to do. And I said, "COME GET US I AM NOT DRIVING THIS AGAIN!"

He drove over and we swapped cars, and he managed to get the car parked within a couple blocks of our house.

I opened the trunk to empty it, and found, among other things, my lovely Spanish sunbathing mat. I'd forgotten about that old friend!

I said it was time. I called the NPR vehicle donation line.

When they asked how they could help me I said, "Please come tow my car away!"

It was going to be a few days until the tow truck could come.

As this is the way street parking invariably works, the day after Nick parked the car, no-parking signs went up because of street repair or something. So I had to move it.

It took all my strength to parallel park it, fortunately at the end of a row of cars. No way I could've maneuvered it between two cars.

I was overjoyed when the tow truck came. I had to meet him at the car.

Actually, they told me I could just leave car unlocked and put the title and keys in the glove box...and I said, "Uh, it's parked on the street in DC."

I mean, I didn't have an entire wheel stolen and not learn anything.

The tow truck driver had two large super intimidating incredibly barky dogs in the cab of the truck and also it is Covid times but honestly I wanted to give him the biggest hug.

I did not. I handed him the keys and the title. He pulled off the license plates, which Nick had loosened, and gave me a receipt.

He asked if the car functioned to drive onto the truck and I said yes but it was hell to steer. He was unconcerned.

I practically skipped all the way home. I called Nick to say it was gone, gone, gone!

Nick was all, "Wouldn't it be great to see Kojo Nnamdi and Kai Ryssdal drag racing in our old Saab?"

I'd pay cash money to see that.

I'd even give them the sunbathing mat for extra joy.