I parked my car at the corner of 16th and Belmont last night. And this afternoon, when I was walking up 16th St. to get it, I started noticing shattered glass on the curb. Every other space had a pile of broken window glass next to it.

I started worrying that my car wouldn't be there when I turned onto Belmont. It was. I sighed with relief. As I was walking towards it, I realized that there was such a pretty pattern on my windshield. The pattern that glass makes when you take something really, really heavy, like perhaps a rock, and smash it onto the glass. 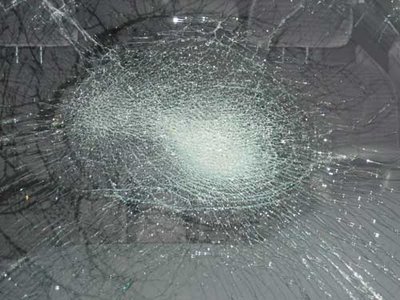 Clearly, last night some asshole went on a car window breaking spree. I have to say that the expectation of having no car made me actually relieved that it was just my window. I mean, it super-sucks, that's for sure. But it's DC. And in the end, it's just a window.

Last year someone stole my wheel. I don't mean my tire. I mean my entire wheel. I came out and my car was propped up on a jack, and there was a little nub sticking out where the wheel used to be. They'd clearly started on the wheel next to the curb, because they got the tire partly off, but couldn't get it all the way off because it was parked too close to the curb. For once I was delighted to be an unskilled parallel parker.

Luckily, my dad happened to be downtown visiting me. So he walked to the nearest garage, got some lug nuts, and then an incredibly nice man helped him get my car down and put on the spare.

While this was going on, a policeman happened along. I asked if he could write a report for me, and when I explained that my wheel had been stolen, he said, "Ha. You're lucky your whole car wasn't stolen." And then he asked, "Why don't you have locking lug nuts?"

"What are locking lug nuts?"

"You live in DC and you never heard of locking lug nuts?"

The truth was, I'd never heard of lug nuts.

Locking lug nuts, for those of you who do not live in wheel-stealing cities, are just as they sound. They lock. You buy a set of four, for $50, I think, and put one on each tire. You can only take them off with the key that comes with them.

These things remind you that you're in a city, and that you're not safe. At least it was my car, and not my place, which would feel like so much more of a violation. I'm not emotionally attached to my car.

I have never been a car person. I like my car because it gets me from one place to another, and it is not hard to park, even for the parking-challenged. But cars don't interest me. I have notoriously poor car recognition skills.

Since I went to high school in India, I didn't get my licence till I was almost 19. My dad spent a few weeks that summer teaching me, and then he drove me up to the Virginia DMV. I took the little written test, and then it was time for the driving test, which I absolutely dreaded. The man came to get me, and we walked outside.

"Where did you park?" he asked.

"Hmm. Maybe this one." It wasn't there. There was parking on all four sides of the building, and I hadn't been paying the least bit of attention when my dad parked.

We walked to a second side. It wasn't there.

He asked, "What kind of car do you have?"

We walked to the third side of the building. It wasn't there. He was, understandably, getting more and more exasperated.

"What." he said, very slowly and through clenched teeth, "What. Does. Your. Car. Look. Like?"

That I could answer. "It's red and square!"

We found it! He clearly thought I was a massive idiot. But I passed.
Posted by Lemon Gloria on Sunday, November 19, 2006