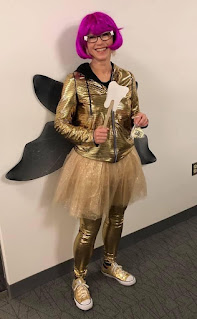 I told you ADHD is my new topic.

Also: this photo has nothing to do with this post, but it popped up recently and I don't think I ever shared the glory of me being the Tooth Fairy with you.

I didn't win the office costume contest, and I couldn't fly because my wings were upside-down. But I did get some very weird looks on my walk to and from work.

And honestly, I wish I'd blogged about my journey with antidepressants, because then I'd have a record. Because at this point I cannot remember what all I've tried.

Like, I know I hate Wellbutrin because it makes my whole body clenchy and makes me constantly enraged.

Zoloft made me sleepy. And messed with my marital life. The confusingly spelled Viibryd, while sounding like a marital enhancer, did the opposite.

Mirtazapine helped me sleep, but was also the opposite of a marital aid, and made me gain weight. Which made me more depressed. So all around not my ideal antidepressant.

So far, Trintellix for the win!

But there have been a smattering of others in the mix, and every once in a while someone asks me if I've been on one...and I can't remember. Maybe? Odds are?

I saw my beloved primary care provider yesterday. I told her that I was feeling like kind of a basket case.

We talked about my concerns with Adderall and my hair, with which she completely sympathized. We have, in fact, had some in-depth hair discussions, as we regularly bump into each other in the neighborhood and she now goes to my hairdresser.

She asked if I could cope without ADHD meds (or if I wanted to), and I got all teary.

I mean yes, I can cope, because I've done so for decades, and for the most part I'm a fairly functional human. But the truth is, once I realized it didn't need to be so hard, I want it not to be so hard. And by "it" I mean everything.

I really, really liked how they organized my brain. I liked the quiet inside my head. I know they're stimulants, but it was soothing.

Does that sound weird? Probably, unless they do the same to your brain, in which case maybe you totally feel me?

At any rate, I told her about my googling and my forays into Reddit, and how people who reported hair loss with Adderall did not have the same issue with another medication. So I asked if we could try something else.

She was more than happy to. She really, really wants me to feel good.

So now I have a Vyvanse prescription.

And she ordered a bunch of blood tests in case it's my thyroid or a vitamin deficiency or something else.

Or maybe it's hormonal? I mean, I currently sleep in a cool room—and I know it's cool because I ask Nick. I'm like Peeta after being tortured with tracker jacker venom.

I walk around asking if it's hot all the time.

Which is ridiculous, because when it's actually as hot as the surface of the sun in DC, I'm delighted.

But hot flashes are a particular kind of hot that feel like being stuffed into a sauna filled with fleece blankets.

I love a sauna but not when I'm just sitting quietly watching Endeavour on Masterpiece Theatre, which is what Nick and I do at night because we have effectively turned into our parents.

Which I will be discussing with my GYN.

I've explained to my kids that they are heading into puberty, and their hormones are increasing, and so if they notice that sometimes they're upset or angry or really sad out of the blue, and it just feels beyond their control, it's totally normal. I said that we might have a few difficult years, because these hormonal shifts make people really moody.

Then I told them that basically my body is doing the same thing in the opposite direction.

And they were like, so sometimes you're really angry or sad or upset because of your hormones and you feel out of control?

It's quite a party at our house.

I'm still not up there with most productive humans, my husband being one of them—because my gosh, does that man get an extraordinary amount of stuff done!

I scanned the kids' health forms and filled out other forms to which I affixed India's health forms so that she can play sports.

I called the pediatrician and had a lengthy conversation with a staff member about how to set up two separate children on their brand-new and rather confusing—for them as well as for me—portal.

The whole thing ultimately involved using two separate email addresses because otherwise the system thought it was all for the same kid.

I won't bore you further but it was the kind of process that I typically avoid until it's beyond unavoidable just because it's detailed and confusing and boring.

But today I powered through.

Not to brag, but do you know how many portals I have? So many! Because I myself have a number. And then I take care of a couple for my mom. And then there are these two new portals rather than just one for my kids. And school portals. And a sports form portal.

What I really need is a portal to another dimension just to pop out of this reality every once in a while.

And on a side bar, do you understand the multiverse? I feel like I believe in it but am not smart enough to actually wrap my brain around it.

But back to this universe: I also made mammogram and GYN appointments.

All this to say, so far so good on the Vyvanse and I'm pretty proud of myself.

You should resist going to bed and instead eat some sugar!"

And really, who am I to argue?

Email ThisBlogThis!Share to TwitterShare to FacebookShare to Pinterest
Labels: ADHD