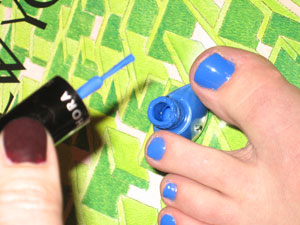 My job is fine, perfectly fine. My official title means not much of anything to anyone in terms of being an accurate description of what I do.

What it really means is that I'm the person who can do some techie stuff but mostly I can play nice with people, and so I am in between our (often contentious) content providers and the technical people. I'm the also person who deals with our online training courses.

I knew the job would be fairly dry when I took it, but there were a variety of good things about it, including the ability to walk to work, to have a very 9-5 workday, and to have time to do things I love. And I knew there would be the ability to nudge it in a more interesting direction.

I like my boss and my close colleagues. It's the dragons in other departments that occasionally make it miserable. But most days, it's fine.

This morning I had a meeting with several people, including one of the dragon ladies. And so, when I am left fuming about the malignancy of some of the people, I remind myself that there's always foot prostitution.

Foot prostitution would never, ever have occurred to me on my own.

My sister-in-law mentioned one day that she saw an old high school friend who lives in NY and is now a foot prostitute. Huh? Well, she started out as a foot model, and then she met some guy who likes feet, and he started buying her fabulous shoes. And now she does stuff for him, and he pays her $1,000 every time.

She had no idea. All she knew was that her friend had wanted her to accompany her to meet the guy at some swank-o restaurant. He'd buy them lunch, and then take her shoe shopping, and then she'd, well, she'd do whatever it was that she did.

"Why didn't you ask what she does? How could you bear not to?"

It seems to me that if someone tells you they're a foot prostitute, they're practically inviting questions and comments. If I ever meet the woman, I have soo many questions for her.

We figured that there might be a lot of toe licking, or fondling. Maybe even some foot/penis action? Neither of us have much imagination in the foot arena. But really, we decided, even if you had to stick your toe in someone's anus for an hour, it'd be worth it. A thousand dollars. If you did this once a week under the table (no pun intended) you'd make $52,000 a year. Which seems like a lot for what I imagine to be not a lot of work.

I've asked around, but nobody I know knows any foot prostitutes.

A guy I know, though, a completely flamboyant gay man, said he was once with a guy who liked feet. The man had my friend put his foot in his ass. And then the guy asked him to wiggle his toes!

This image I was unprepared for. Wiggle your toes inside someone's ass! It seems like the toe wiggling one ought to charge extra for.

I was recently on a date and as there was a lull in conversation, I brought up the foot prostitution. Yes, I did.

But the guy thought it was hilarious. I asked how he thought one should go about it. And without hesitation he said, "First, you take a sexy picture of your feet. To post on craigslist."

The thought of a sexy picture of my feet makes me laugh. My toenails are Smurf blue, for goodness sake.

"Barefoot or in heels?"

"Oh, one foot barefoot on the floor. You have your legs crossed and the other foot you have a shoe dangling off of. Like this!" And he proceeded to pull out his chair, pull up his jeans to show his ankles, and demonstrate.

And then he looked around the restaurant sheepishly and said, "Whoa, all of that came out a little too easily, didn't it?"

He plays hockey, is remarkably fit, and has offered to be my foot pimp. He said he could use his hockey stick as a weapon in case anyone got out of line. He wants 60%, though. I told him this seems high, considering he's not going to be the one with the toe in someone's anus. We're in negotiations.

So there you have it. It's Wednesday, and well, there's always foot prostitution.
Posted by Lemon Gloria on Wednesday, November 15, 2006