I know who I was when I got up this morning, but I think I must have changed several times since then. 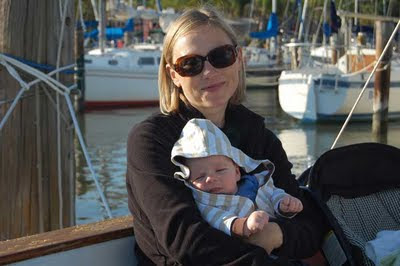 I have a lot of Alice moments.

Nick and I went out to check on his boat last weekend to make sure it was still afloat. And it was. With the new engine and whatever else, it doesn't take on water like it used to.

While we were there, he looked around, and said that he'd bought it almost exactly two years ago. Scant weeks before we met. Two years ago he was single, buying a boat prior to turning 40, and contemplating eternal bachelorhood.

And now there he was sitting on his boat with his wife and son.

So I was thinking about where I was two years ago in contrast to now. And now is worlds better. And so vastly different.

Then yesterday I realized that Monday was the three-year anniversary of Lemon Gloria. Three solid years!

And I forgot! Sorry, LG.

I started the blog heartbroken, as so many people do. I wrote and I cried daily. And of course, threw myself into dating. Because that's the best thing to do when you're heartbroken and not ready.

It's been a varied ride.

But currently I feel like I've taken on this new identity - one in relation to Jordan, and to Nick - and in the process, lost some (much?) of myself.

I mean, I think it's necessary when you have a new baby to be all about the baby. His needs are so great, and so immediate. And you can meet them. And honestly, when he looks at you and smiles, it just squeezes your heart so tenderly and so hard at the same time.

But at some point Refugee (who, I should add, is a friend of mine, and included this in a compliment to me) referred to me as a mommy blogger - albeit an interesting one - and this caught me up short. Because since the arrival of the kid, that's pretty much all I talk about. And think about. And subsequently write about.

And I've started to wonder who I am anymore. My life has become so narrow. I love this window to the outside. But does the world really need another mommy blog?

And am I am boring the tar out of you all?

I'm still on maternity leave. I spend the bulk of my time with Jordan. I don't have random encounters on the street. In fact, I often don't leave the house. I don't even change my clothes daily.

Mostly, I write about one topic: my baby.

Which, now that I think about it, is probably preferable to writing about my vagina. I'm not sure.
Posted by Lemon Gloria on Friday, October 16, 2009