Pumpkins, poison, floorboards, and just basically more ways to get yourself arrested 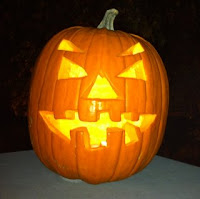 I'm not a violent person, and I don't think I have anger issues, but sometimes I think some very terrible things.

Not just ha ha let's fling poo at people. No.

More like oh, what's a little murder here and there anyway.

It started when Nick suggested we have a pumpkin carving contest. And then he carved them both, since I'm not such a pumpkin carver.

Also, the inside of pumpkin gunk really grosses me out. Although Maude told me that the seeds are high in zinc and good things to feed men to improve their baby missiles. If that's up your alley.

The second pumpkin is mine, and we both like it better. So basically, I win. Don't you think? 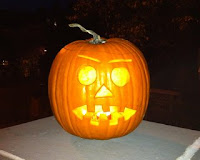 Anyway, more on-topic, we live in this urban neighborhood with a lot of post-bar foot traffic on weekend nights. So Nick didn't want to leave our pumpkins out front for drunken idiots to smash. Which I think is only smart.

But it got me thinking.

"What if you put poison all over your pumpkin and someone stole it and died? Could you get in trouble?"

"But why? If it was on your property?"

His explanation had something to do with using force out of proportion to the crime, if I recall correctly.

"But you could use rat poison. You could pretend you were just trying to kill neighborhood rats. And if someone stole it and died, well, that wasn't your intention."

He went on to say that people used to be jailed (or maybe it was put to death?) for hunting on a land owner's property. But then over time chattel property became less important and a higher value was put on human life and a lot of other details that I didn't really listen to but basically you can't shoot someone for breaking into your house.

And of course I am in favor of gun control, and I can't imagine actually shooting someone. Or more likely stabbing someone, as that's my constant refrain. But you'd have to be really close and strong and I just don't seem like a good stabber, you know?

Unless it were my husband and he was sleeping. But I haven't felt like doing since the PPD, I don't think.

So Nick gave the example of setting up a shotgun to shoot if the front door was opened. So if you weren't home and someone broke in, they'd be killed. Which apparently people have actually done.

And somehow, although I will never own a gun, I understand this.

"But you aren't actually shooting them yourself. And they're breaking in."

"You can't protect property with murder. It's not a good enough reason to kill someone."

"What you should do in that case is have rotting floorboards just inside the front door. And you keep them covered with carpets. And then the person who breaks in falls through to the basement and dies."

"What's up with you and the killing imaginary people?"

Although, seriously, look at this: This guy in London moved out for a week for his house to be decorated, and squatters moved in and changed the locks.

Would that not make you violent?
Posted by Lemon Gloria on Tuesday, October 26, 2010