On what would've been his 76th birthday 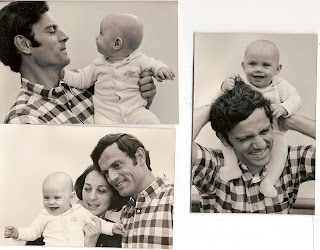 The other day, I almost picked up the phone to call my dad.

And then I remembered.

It's weird, because it's now been almost three and a half years, and it's the first time that has happened. I dreamt about him the other night as well, which I haven't done since right after he died. I've never smelled his cologne since, and I really do believe it was him saying goodbye and taking flight.

Betty and I almost never talk about him. I don't know if this is good or bad. It just is. But every once in a while Jordan will be doing something and she'll say, "Dad would have loved this kid so much."

And he would have. And he'd love little India as well.

I know now he was a better dad to me than to my brother, who is almost four years younger. Something shifted in my dad when my brother was very little. He started getting sick all the time in Bangladesh. I don't remember how he was in Egypt, but really wasn't doing well by the time we were in the US, leading up to his first suicide attempt.

Basically, what I realize is that I got more of the fun and my brother got more of the crazy. You can have the same parents and yet have very different parenting experiences.

It's not fair -  it's just birth order and timing. Hell, none of it's fair. It's just life.

My dad was sure he'd die at 72. I don't exactly know why; perhaps because that was the age of both of his parents, who died in different years, of different types of cancer.

The aftermath of suicide is so very complicated. I was devastated. I no longer had my dad, one of the most important people in my life. I was angry. He'd left us, really left us this time. We'd been abandoned. Lied to. Betrayed.

For the longest time I felt guilty every time I said anything negative about him. Or expressed anger towards him.Even though I was sometimes chokingly angry.

But you know, the aftermath of growing up with an unstable parent is complicated as well. When you look at our family with a little distance, there is some really fucked up stuff. I mean, besides the multiple suicide attempts.

Me, I can trace the roots of nearly all my insecurities back to my dad and his behavior. I can blame him, if I choose - but that's the lazy way out. We can all blame our parents for all our problems, really.

And even if we do so, they're still our problems, until we work them out.

My cousin Lyrae was in town recently, and we were talking about my dad and about grief. She said she's realized it's not linear. You might expect that it gets better and better and better, until it is all gone. But no. It is random and unpredictable, swinging wildly up and down, punching you out of the blue during a period of fineness.


I still get so sad, and sometimes resentful, but I think I've forgiven him for abandoning us. And I've almost entirely forgiven myself for the anger. If he were still around, he'd still be complicated. He's still be crazy. So in some ways, life is calmer now.

But I'd take the ups and downs of the old crazy, any day.

I'm rambling. I don't really know what I'm saying. It's just, you know, October third. It's my dad's birthday.
Posted by Lemon Gloria on Wednesday, October 03, 2012