Sharing joy: Mary and the reindeer

Last Friday, the little kids in Jordan's school had a holiday concert.

They'd been practicing songs for weeks. Jordan would sing snatches of songs on the walk home, or at the breakfast and dinner table. Jingle Bells and Feliz Navidad were in heavy rotation. As was Bananas in Pajamas - that old holiday classic. ??

He was so pleased. It was very cute.

Nanna and India and I were all going to see him sing! We'd made treats to bring to the party afterwards. Basically, it was the big pre-winter holidays celebration.

There was much excitement leading up to it! Last day of school! A singalong concert! And then a party! And then vacation!

Some kids had individual parts. Most of the kids sang the sweet and silly songs. Bananas! In pajamas! Are coming down the stairs!

My kid, however, sat like this the entire time: 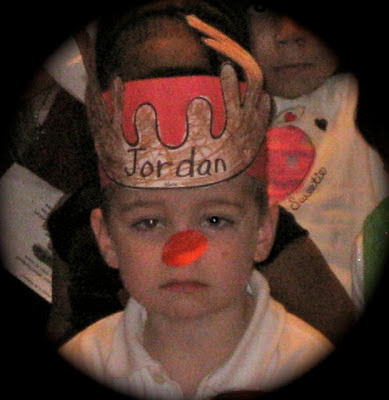 Actually, not the entire time. Sometimes he sat like this: 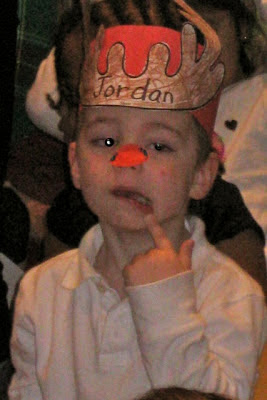 And there were a few moments during which he was actually weeping -- the reason for which is unclear.

Ostensibly, he hated his nose. And antlers. And, you know, the singing. And everything except cupcakes.

India, on the other hand, sat in the audience like this: 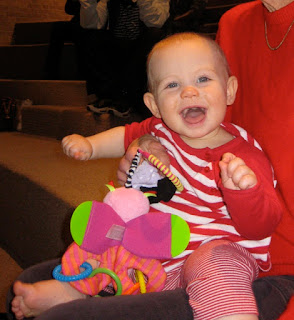 I kept beaming at Jordan, waving, letting him know that I was so pleased to be there, so pleased that he was in this great concert! This had no effect.

So I turned to Betty and asked, "Would it be impossible to smile while he's up there? Or sing even one of those songs we've heard for weeks? Why is he sitting there like that?"

And you know what she said?

I have to admit, she knows of what she speaks.

Ah, well, what's a concert anyway? He's been delightful since then, though, and he's so excited for Christmas.

Or, as he pronounces it, Qwithmuth.

And India, well, Qwithmuth is just another awesome day to her. Yaaay! Life is terrific!

Our little family is together, and we have plans today and tomorrow with dear, dear friends. We are lucky, so lucky.

Whatever you might celebrate, I'm wishing all of you sparkles and love and hugs and joy. Because no matter what, you can never have too much of any of those, don't you think?
Posted by Lemon Gloria on Monday, December 24, 2012

Email ThisBlogThis!Share to TwitterShare to FacebookShare to Pinterest
Labels: India, love and happiness, the Betty, the boy