When you can stick your finger into it without it burning... 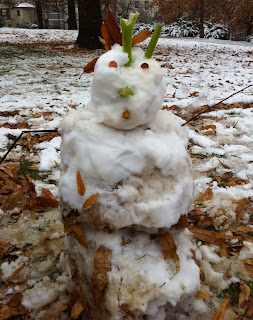 Jordan has been fantasizing about making a snowman for ages.

So finally, it did. And there's not a lot, but enough for leafy snowballs and snowpersons. We headed out with neighbors and their kids, and together we made a, uh, snowalien.

Someone suggested we make it a snowzombie but I seriously can't handle zombie anything. Ghosts I find interesting. Zombies, terrifying.

Anyway, ours is a vegetarian snowalien. Don'tcha think?

In other winter news, my cousin Lyrae and I decided to make her grandmother Florence's fudge.

Florence was my Gramma Lillian's sister. She was a North Dakota farm wife, and never had a recipe, but one time my mom watched her making it and wrote it down as they went. 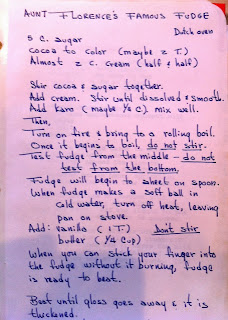 So my Gramma Lillian used to have a cardboard toilet paper roll in her kitchen. There were matches glued all around one end of the roll. They called it a Swedish flashlight.

The Swedes and the Norwegians, neighbors all, had the same jokes - the butt of them depended on your ancestry.

I think we initially kept the heat too low trying to get it to the "soft ball" stage. We even used a candy thermometer with a line that actually says Soft Ball and Hard Ball.

At one point Betty, Lyrae and I were all huddled around the fudge pot, with Lyrae holding the thermometer upright, Betty dipping in a spoon to see if it was sheeting, and me adjusting the temperature. And then we were all, "How many Norwegians does it take..."

In any case, my favorite part of this recipe is toward the end, when it says, "If you can stick your finger into the fudge without it burning, fudge is ready to beat."

Ultimately, the fudge is fantastic. If I do say so myself.

And it only took us three Norwegians most of a day.
Posted by Lemon Gloria on Tuesday, December 10, 2013

Email ThisBlogThis!Share to TwitterShare to FacebookShare to Pinterest
Labels: family stories, i'mamama, love and happiness, there's something wrong with us