I'm not suggesting they'd be sexy 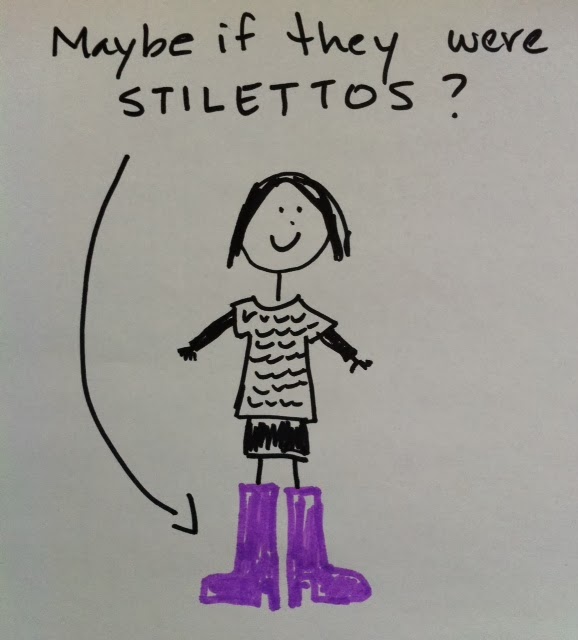 Now what I really want are a pair of thigh-high Uggs.

(Also, the T-shirt in the picture looks like it's ruffled, which is really not my style, because I first put two little boob marks to show that it was a fitted outfit, but then they just looked weird. So there you have it.)

They do not seem to make them taller than knee height. Perhaps they think the demand would be low? Or perhaps it has not occurred to them?

Nick said this was a bad idea because they're not actually all that flexible (he stated with authority, having never even stuck a toe into one), to which I said, waving my feet in the air, "Au contraire! They're like butter!"

Like soft, furry, sheepy butter. Which, uh, sounds disgusting. But I mean it in the best possible sense.

And I would never swipe it on your nose. I promise.

My Uggs just feel so good I wear them all the time. But they feel best when I first get out of bed and am wearing them with my boxers. It's too cold outside not to wear pants.

But! But if they made thigh-high boots, then you actually could wear them with a skirt or a dress because you'd be wearing fleecy sheepskin almost up to your hoo-ha, which doesn't typically get all that cold.

Although my butt gets very cold. Does yours? My hands, my nose, my feet and my butt tend to get ice cold. But really, it's my hands and feet that bug. My nose and posterior, not so much.

In fact, I often don't know they're cold until I touch them. Which I don't do on a regular basis. In case you were worried that I walk around in public monitoring my butt temperature.

Actually, I would like an entire Ugg bodysuit. I think that would feel fantastic.

And on a sort of related note, we were explaining to Jordan that our house used to be a hotel and that our kitchen used to be a bedroom. And so he asked what his bedroom used to be.

Unlike the fartsadillas, this one went over very well. A fart factory! Just imagine!

You'd definitely want to wear your Ugg bodysuit if you visited, no?
Posted by Lemon Gloria on Friday, February 07, 2014